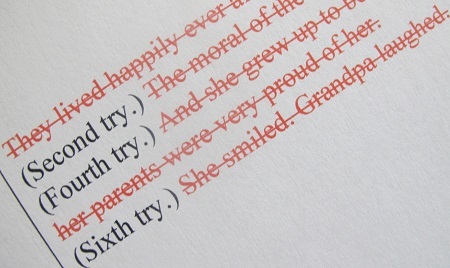 They lived happily ever after. *shaking head; strike that*
(Second try) The moral of the story is… *ack! Delete*
(Fourth try) So she grew up to be a doctor and her parents were very proud of her. *rolling eyes; Cut!*
(Sixth try) She smiled. Grandpa laughed. *grumble, grumble; Wad up paper, toss in trash*

Stumped on how to end your story?

Editors say to end stories organically. What does that mean? It does not mean to sum up the story or project into the future. To end organically means the ending should grow out of the heart of the story in a natural way.

Many novice writers seem stuck how to end so they have the characters smile or laugh or hug or show some other happy emotion. These writers do have the right idea in that no matter how bleak the conflict and troublesome the obstacles may escalate to, children's stories should end on a note of hope. Endings of children's stories should give a hint of better things for tomorrow--without telling what will happen tomorrow. Let the reader finish the story with characters that will live on in the reader's imagination.

"I do think endings are as important as beginnings. I try to leave a strong sense of place, no matter what else needs to be in that last paragraph. I love when a scent, a smell works, or touch. And I almost always get at least a rough draft of the last sentence or paragraph before I get there. It will change, but the sensual part of it might still work," said Dandi Daley Mackall, author of The Silence of Murder and more than 400 books for all ages.

In Western literature endings often circle around to the beginning. So when you finish a story, go back and read the beginning. If your ending seems just right, you might need to change the opening to match the ending. This is especially true if the character takes the story in a different direction than you expected when you started writing your story.

Get out a dozen or more MG (middle grade) and YA (young adult) novels and read just the first sentence, then the last sentence; then the first paragraph, then the last paragraph; first page, last page; and finally, the first chapter, then the last chapter. See a pattern? The most complete example of this in adult literature is James Joyce’s Finnegan’s Wake. The first sentence (fragment) begins incomplete:
riverrun, past Eve and Adam's, from swerve of shore to bend of bay, brings us by a commodius vicus of recirculation back to Howth Castle and Environs.

The last sentence (fragment) is the beginning of the first sentence:
A way a lone a last a loved a long the

I don’t recommend using Joyce’s experimental technique in a children’s story, but the point Joyce was making in Finnegan’s Wake is that everything in life is cyclical, including stories.

Let's look at the beginning and ending of Nightmare by Joan Lowery Nixon. This mystery begins with a dream that shows the crime:
Shades and shadows slithered over and around her, trailing wisps of damp air, sticky-sweet honeysuckle, and the acrid smell of rotting leaves. Her heart pounded, and she grunted with exertion, struggling to get through the tangle of vines, knowing--even in her sleep--what she would find when she broke free. The crumpled body lay half in, half out of the water, eyes stretched wide with horror, mouth open in a scream no one could hear.
In her nightmare the body was always there.

At the end of the novel, the killer wears honeysuckle perfume. Notice how Nixon uses setting and sensory details to end this story, even using setting in a symbolism of hope for the future--she comes out of the dark cave and into the sunlight:

The cold, damp walls of the cave seemed to press toward her, and she could hear a scurrying sound coming from the dark shadows. Bats? Mice?
"I want out of this place," Emily said.
…[3 paragraphs]
Unfortunately, she thought, it will never be over. Nightmares had a way of retuning when least expected, and now the old dreams would be joined by a new one: the haunted eyes of a desperate woman in a dark cave.
But Emily realized she was no longer afraid to be Emily. She no longer needed to be invisible. She smiled at Haley. "I can handle it," she said.
"Well, of course," Haley said.
Emily followed Haley from the cave up the steps into the late-afternoon sunlight.

Notice, too, that the main character, Emily, matured through her experience--she was no long afraid to be herself or felt she needed to hide and be invisible. Nancy Lamb, in The Writer's Guide to Crafting Stories for Children, says this is "Ending Rule #1: If the hero doesn't change or grow or learn something important, create a new ending or don't write the story."

Besides ending organically, not all stories end in an HEA—happily ever after—like Romances. My coming-of-age literary novel NO SURRENDER SOLDIER (Merit Press, 2014) ends on a note of hope, and with great character growth, but I’ve have readers ask me what happened to Kiko’s older brother, Sammy, who is MIA in Vietnam. They demand a sequel (which I don’t plan to write) or demand to know if Sammy comes home to Guam, telling me they like their stories to end tied up with a tight bow. The fact that these readers demand to know what happens to the characters after the story ends reassures me that I ended NO SURRENDER SOLDIER just right. It means the characters and story lives on in the readers’ minds. Jodi Picoult says it well here:

“…my grandmother never finished her story. Not because she didn’t know the ending; and not because she did…and couldn’t bear to write it. She had left it blank on purpose, like a postmodern canvas. If you end your story, it’s a static work of art, a finite circle. But if you don’t it belongs to anyone’s imagination. It stays alive forever.” -- Jodi Picoult, THE STORYTELLER (S&S, 2013)

In the end, when ending well, don't tell the reader what your character learned, show through action occurring organically from the heart of the story. Then hear the reader’s laugh or cry or "ah-ha" or “ahhh” at the satisfying end of your story.