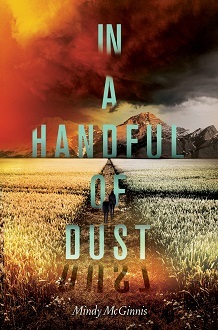 IN A HANDFUL OF DUST (Katherine Tegen/ Harper Collins, 2014) by Mindy McGinnis is a companion novel to NOT A DROP TO DRINK, both futuristic survivalist tales.

Today's guest blogger is Mindy McGinnis, author of NOT A DROP TO DRINK (Katherine Tegen/ Harper Collins, 2013) and its companion futurist suvivalist novel A HANDFUL OF DUST, tbr September 2014.

So, you've got an absolutely fantastic idea to write a romance set during the potato famine in Ireland. Maybe you just like the accent, or are drawn to rolling green hills, but the idea is stuck in your head and you can't get it out. So what's stopping you?

Maybe the fact that the accent and rolling green hills is the sum of what you know on the topic?

I don't think the first step is buying a plane ticket. I'm a thorough researcher and I like to exhibit that in my writing, but I don't start by traveling internationally or finding out the bacterial origination of the black rot that wiped out the potatoes in Ireland all those years ago.

Because that's not what I need to know in order to write this story.

I love non-fiction, but reading a dense book (or two) about the immigration statistics and cultural backlash that arose from the potato famine probably isn't going to fire a lot of creative synapses in the brain. It definitely can inform the story, but you're still on square one and drowning this little seed of an idea with 200 gallons of water isn't the best way to nurture it at the outset.

My advice? Go to the kids section of your library or bookstore. Find a very basic book about the topic you want to learn about in order to start this story. Right now your seed needs simple building blocks of life to get a good start—water, sunlight, soil. It's the Who? What? Where? When? of your story, and a non-fiction book written for children will point you in the right direction without the unnecessary equivalent of chemicals and growth additive type facts that are just going to burn the tender roots of your seedling idea and make your brain switch off.