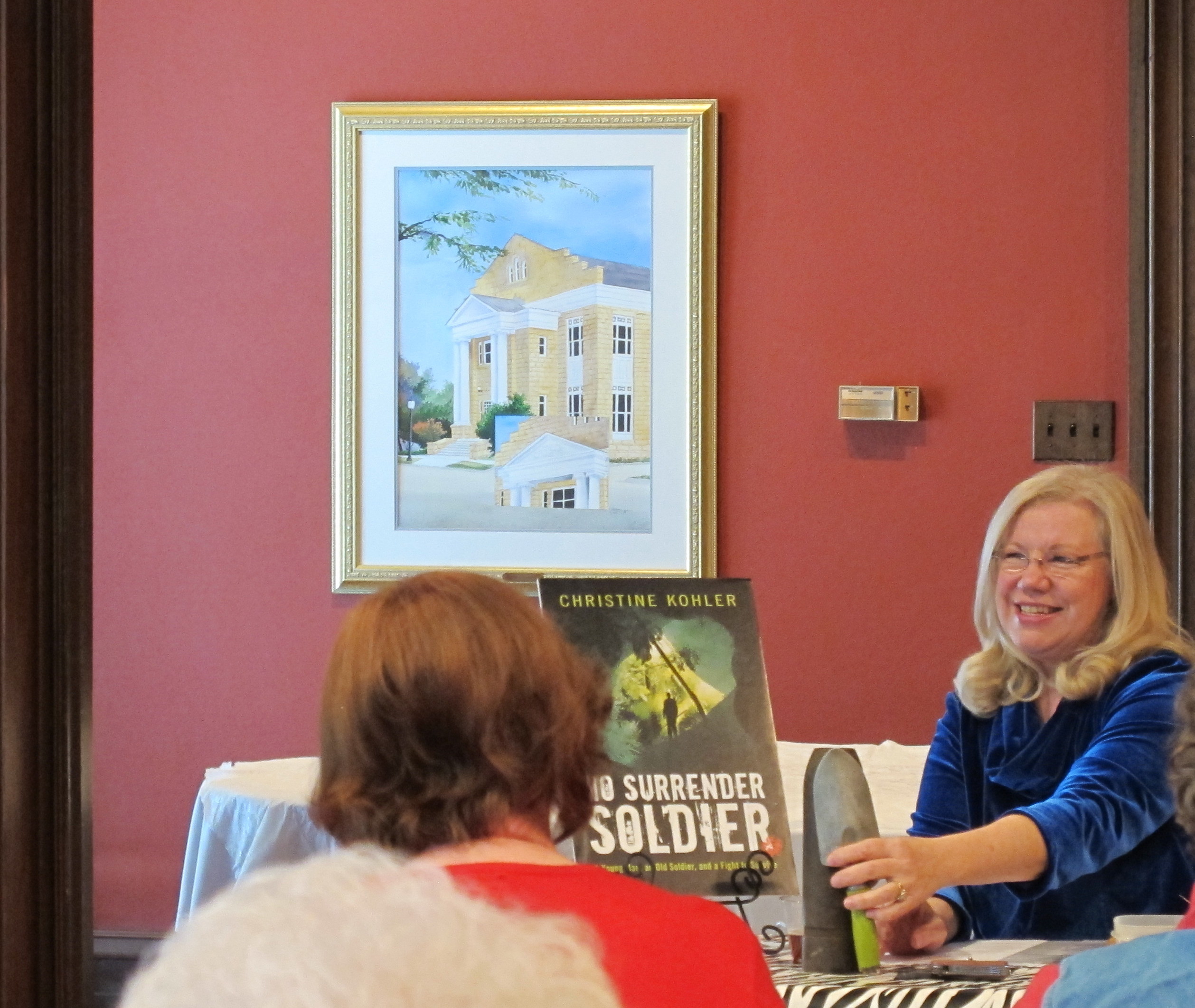 I'm showing how the WWII soldier used a cannon shell to dig an underground tunnel to live in the Guam jungle. Carnegie Library in Ballinger, TX, hosted a launch party for NO SURRENDER SOLDIER.

NO SURRENDER SOLDIER’s launch day. Wow, what can I say?
What a wonderful day!

Fellow Merit Press author Steve Parlato (THE NAMESAKE, released Jan. 18, 2013) said that during this past year since his debut novel released that every event has been like birthdays and Christmases over and over again. That’s a good description of the euphoria I’m feeling this week. As if I just had this huge coming-out party.

And I did! Rather NO SURRENDER SOLDIER did have a “Part-ee” (as they say in BECAUSE OF WINN-DIXIE) all day long!

The morning began with me taking a WWII cannon shell and coconuts to my novel launch at the Carnegie Library in Ballinger, where we’ve lived for nearly six years. I’m really grateful to the library board and librarian, Ruth, for organizing this event.

It was fitting that 17 people attended my research talk because this was my 17th book published, although No Surrender Soldier is my debut novel. Prior to the event I only knew two or three of the people who attended, not counting my husband and daughter, so I was deeply touched by everyone who took off a Saturday morning to come. They even stayed an hour over the scheduled ending, for 2 ½ hours total. The library board baked and served home-made cookies and punch.

The WWII cannon shell during my lecture showed what the real “no surrender soldier” who hid on Guam used to dig an underground tunnel where he lived the last eight years. I used coconuts to illustrate how difficult it would be to survive in the jungle.

Afterward attendees asked questions. Believe me when I say I have lectured a lot in my day. Consider I used to teach and have lectured at many universities. But never have I met such an enthusiastic audience who asked probing questions and had interesting insights.

Veterans Services Officer, Sandra Van Zant, USN (ret.) told a fascinating story about her time on Guam and encounter with a Chamorro man who grew up near the WWII soldier’s cave. I had no idea she had lived on Guam. And it blew me away that she knew this never-before-told story. What are the odds that we both moved to Ballinger, a little rural town in West Texas?

Meanwhile, back at ranch, as they say—only in this case on the internet—my posse (meaning “power of the community” for you non-Texans) was posting an all-day party in my absenteeism. (My family had a hankering for DQ in Eden since my husband had coupons for Blizzards. You can tell we celebrate high on the hog when we’re standing in high cotton.) Many thanks to Class of 2k14: Fiction Addiction and Uncommon YA, and even the Fearless Fifteeners, plus everyone else who likes an all-day internet hoe-down! Thank you one and all!

I’ll be appearing from 1-4 p.m. January 25 for a meet-and-greet and book signing at the Stephens Library, Tom Green County, San Angelo. So as we say here in Texas, y’all come down and see me and say howdy!