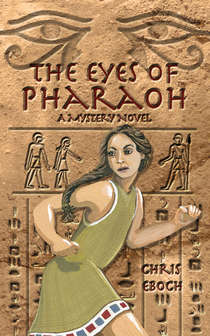 THE EYES OF PHARAOH by Chris Eboch

[Note: This article is revised reprint from a 2012 CHILDREN’S WRITER column, published by The Institute.]

I read a lot of works in progress, between my work as a teacher through the Institute of Children’s Literature, my editorial business, and occasionally acting as a

contest judge or conference manuscript critiquer. Having interesting characters and a fun, original idea is a great start. But each scene has to be smooth, well paced, and exciting as well.

In writing, a scene starts when characters show up on the page and start interacting. It ends when you jump to a new time, location, or group of characters. Each scene should be linked in a logical and dramatic way, tying the overall plot together.

Every work of fiction has a story question that summarizes the plot. For example, in my historical fiction novel, THE EYES OF PHARAOH, the main character hunts for her missing friend. The story question is “Will Seshta find Reya?”

Over the course of a novel or short story, the main character tries to reach her story goal through a series of shorter-term scene goals. Seshta’s short-term goals include looking for Reya in likely places, asking questions, and spying on people who may be involved in his disappearance. Each scene goal should be expressed as a clear, specific question, such as, “Will Seshta find Reya at the army barracks?”

Scene questions can be answered in four ways. If the answer is “Yes,” you have a happy character and not much conflict, so save this for the last scene.

If the answer is “No,” the character has to try something else. That provides conflict, but it’s essentially the same conflict you already had.

An answer of “Yes, but…” provides a twist. Maybe a character can get what she wants, but with strings attached. This forces the character to choose between two things important to her or to make a moral choice, a great source of conflict.

“No and furthermore…” is another strong option because it adds additional hurdles—time is running out, or your MC has a new obstacle. It makes the situation worse, which creates even greater conflict.

One way or another, the scene should end with a clear answer to the original question. Ideally that answer makes things worse. The next scene should open with a new specific scene goal and probably a review of the story goal. Here’s an example from The Eyes of Pharaoh:

Scene question: “Will Seshta find Reya at the army barracks?”

Answer: “No, and furthermore, she thinks the general lied to her, so Reya may be in danger.”

Next scene: “Can Seshta spy on the general to find out the truth, which may lead her to Reya?”

Over the course of a novel, each end-of-scene failure should get the main character into worse trouble, leading to a dramatic final struggle.

Don’t Forget The Why

In real life, we don’t always know why things happen. In fiction, we should. We expect story events to follow a logical pattern, where a cause leads to a reasonable effect. If you show a cause without an effect or an effect without a cause, you confuse your readers.

This goes beyond the cause and effect of major plot action. It includes a character’s internal reaction to the external action. Yet I often see manuscripts where action is followed by action with no internal reaction, so we don’t understand the character’s motives. No matter how great the action, the reader is confused and skeptical.

Within each scene, you need to show not just what your main character does, but also why. Don’t assume people can read between the lines. In one recent manuscript I critiqued, the main character heard voices. Ghosts? The narrator never identified them as such. Did he think the voices had another source? Had he not yet decided? Maybe they weren’t supposed to be ghosts after all. The writer may have assumed that readers would interpret this properly, but by not putting the narrator’s interpretation on the page, she left this reader confused.

In MANUSCRIPT MAKEOVER (Perigee Books), Elizabeth Lyon suggests using this pattern: stimulus—reaction/emotion—thoughts—action. In other words, something happens to your main character (the stimulus); you show his emotional reaction, perhaps through dialog, an exclamation, gesture, expression, or physical sensation; he thinks about the situation and makes a decision on what to do next; and finally he acts on that decision. This lets us see clearly how and why a character is reacting. The sequence may take one sentence or several pages, so long as we see the character’s emotional and intellectual reaction, leading to a decision.

Lisa jumped. (Reaction) It was after midnight and she wasn’t expecting anyone. Maybe it was a mistake. (Thoughts)

Take out the middle section and Lisa’s action doesn’t make sense. You can vary the pattern, but make sure you include emotions and thoughts so your character’s behavior is clear.

Link your scenes together with scene questions and make sure you’re including all four parts of the scene—stimulus, reaction/emotion, thoughts, and action—and you’ll have vivid, believable scenes building a dramatic story.

Chris Eboch writes for ages nine and up. In BANDITS PEAK a teenage boy meets strangers hiding on the mountains and gets drawn into their crimes. THE EYES OF PHARAOH is a mystery set in ancient Egypt. THE GENIE’S GIFT is an Arabian Nights-inspired fantasy adventure. In THE WELL OF SACRIFICE a Mayan girl in ninth-century Guatemala rebels against the High Priest who sacrifices anyone challenging his power. Learn more at Chris Brock’s website or her Amazon page.

Chris also writes novels of suspense and romance for adults under the name Kris Bock. Read excerpts at Kris Bock or visit her Amazon page.

Chris’s book ADVANCED PLOTTING helps writers fine-tune their plots. Check out her writing tips at her WRITE LIKE A PRO! blog.