THANKFUL FOR YEAR OF THE BOOK 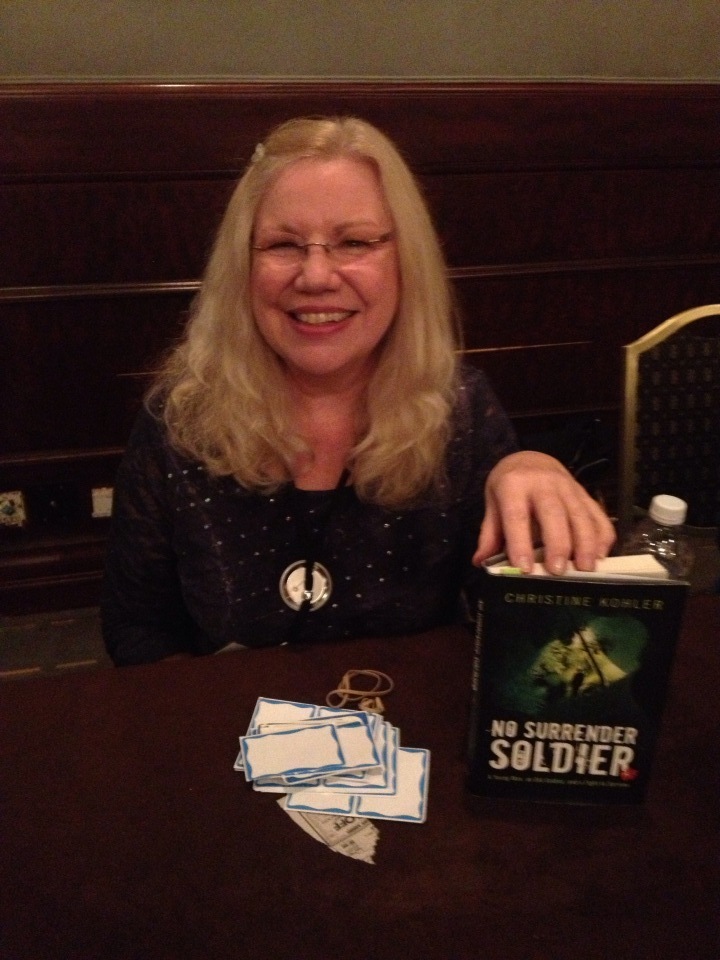 A book signing of NO SURRENDER SOLDIER. Photo by Kym Brunner

By Christine Kohler
Wow! What a wild year 2014 has been. Last December Merit Press (Adams Media/ F+W Media) released the e-book of NO SURRENDER SOLDIER. January 2014 launched the hardback. I want to take this time at Thanksgiving to recap all the wonderful things that have happened in what will always be remembered as The Year of the Book.


This wild ride began in 2012 when New York Times bestseller author and Merit Press editor Jacquelyn Mitchard offered a contract for NO SURRENDER SOLDIER. I have to confess, I am a fan of Jackie’s writing, so when she e-mails me with notes like, “I love your writing,” and “You are a rock star!” I’m definitely flattered. It was fun meeting Jackie, along with Merit Press authors Amy Helmes and Kim Askew, in person at the Tucson Festival of Books Tucson Festival of Books. I will forever be grateful to Jackie and Karen Cooper, owner of Adams Media, so believing enough in my historical novel to invest money and time into it. I appreciated editor Ashley Meyer’s revision notes. My agent had left Spring 2012, so I’ve done this whole deal alone; because of that I applaud Chris Duffy, who has never seemed impatient with me when I have business questions. And I’m throwing a laurel haku lei to Bethany Adams, who has been a spectacular publicist.


A year ago Beth Fehlbaum Beth Fehlbaum invited me to be on a panel for ALAN/NCTE in Boston to discuss coming-of-age novels, which NO SURRENDER SOLDIER definitely fits that category. Beth then invited me on her Texas Library Association Texas Library Association
YART panel to discuss religion in YA literature, which is integral to the plot and characters and setting of my novel in Catholicism, Shintoism, and Buddhism. This offer opened up to a number of engagements at TLA. Beth also asked me to join her on a glog Uncommon YA and I am deeply grateful because it not only gives me another media outlet but I made friends with a whole other circle of fabulous YA authors.


I am thankful for my Class of 2k14 debut novelist sisters. I couldn’t imagine when I joined this group how close we would all grow during this incredible Year of the Books for all of us.

I have appreciated the support of OneFour KidLit, another group of middle grade and YA debut novelists. In particular Natalie Parker and Amber Lough have gone over and above in helping when I was totally lost with such a large group. I’ve also made some friends through this group whom I will most certainly cheer on for years to come.

The Military Writers Society of America is another group of friendly committed writers. I was deeply honored when they awarded NO SURRENDER SOLDIER a bronze medal in the YA category.

As one who specializes in children’s lit, what a thrill when the American Library Association American Library Association accepted our Class of 2k14 proposal to appear on the Pop Top Stage at the 2014 convention in Las Vegas. Blowing kisses to Josephine Angelini and Jay Asher for emceeing our trivia game. Huge gratitude to ALA for nominating NO SURRENDER SOLDIER as a for reluctant readers YALSA Quick Pick.


Thanks to Society of Children’s Book Writers and Illustrators Executive Director Linn Oliver and President Steve Mooser for accepting my proposal to teach a workshop and the international conference in LA. Throwing chocolate to authors Chris Eboch and Ginger Wadsworth for teaching the workshop with me. It was such fun meeting Kym Brunner, another Merit Press author. I appreciate my local SWTX-SCBWI chapter for inviting me to join them at Barnes &Noble for programs.

I am grateful to librarians and bookstore publicists who hosted me doing programs.

I am thankful for librarians who stock my book on library shelves, teachers who use NO SURRENDER SOLDIER in the classroom, and readers who pluck it randomly from bookshelves in stores and on-line. You can’t imagine how much authors love to hear from readers, so I am grateful to readers who took the time to post reviews. I am also appreciative of bibliophiles on Goodreads who have recognized the NO SURRENDER SOLDIER is multi-cultural in characters and settings and have added and voted for it on lists under titles of Diversity, POC characters, foreign (Asian-Pacific) settings and characters. (If you have a minute between turkey and football, please take time to vote for NO SURRENDER SOLDIER on the Goodreads lists.)

Last but not least, I publicly commend my husband for putting up with all the time and money and road mileage I’ve put into marketing NO SURRENDER SOLDIER during this Year of the Book.