MY ACHY-BREAKY HEART OVER AGENTS 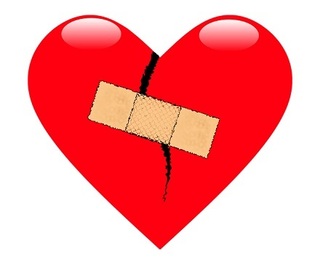 I chuckled at Suzanne Kamata claiming to be the Elizabeth Taylor of agent-marriages and divorces. I don’t quite have the same record—two partnerships, two break-up/abandonments—but I had also always heard that partnering with an agent is a lot like getting married. However, I’ve been married forever to the same man, and I’m beginning to re-think this analogy with agents. I just don’t think agents take the till-death-do-us-part seriously anymore. From my experience, it’s more like till-lack-of-sales-and-income-exceed-two-years-make-us-part.

First, let me be clear: I have never sold a book through an agent. I have negotiated all my own contracts without an attorney. However, do I want an agent? Yes. Why? Increasingly, publishers are refusing to accept unsolicited submissions and contracts are getting more complex due to e-rights and advanced technology.

Let me back up and tell you my history with agents. When I re-entered the children’s lit field, only this time writing MG & YA novels in addition to nonfiction, I decided to get an agent. Like Suzanne, I went to a conference to get an agent the first time, and seal a deal the second time.

The first time I wanted an agent I selected the premiere (first) agent in children’s lit and sent an exclusive query. I also researched and found out she was coming to the Writers League of Texas conference. So we agreed to meet, and I convinced the WLT to set my consult with this agent since she was the only children’s lit agent attending. Since the meeting would only be about 15 minutes, I wanted to keep on track and focus, showing the agent the range of genres I’d been published in children’s lit and samples of what I was pitching. (I excluded adult market clips.) I made a business book of resume’, clips, synopsis and first chapters to pitch. (I also took a portfolio, but didn’t have time to open it and have never taken it to another agent meeting.) The meeting was very successful and the agent, head of her own agency, told me to send one particular YA manuscript to a young agent who had just joined her agency.

Shortly afterward I went to my first SCBWI summer conference in LA. I paid for a consult, where SCBWI matches you with an agent, editor, or author. At this time I was being “courted” by the new young agent at the premiere agency. At the SCBWI conference I was matched with a hot rising-star agent, as everyone described him. In our meeting he made it clear he loved my YA novel, and wanted to read the entire manuscript because he was really interested in repping me based on the partial. However, I wasn’t keen on him because he wouldn’t look me in the eye. His eyes roved to the walls, the floor, the ceiling. Not a good first date. He reminded me of immature high school boys during my teacher conferences. So I thanked him, but signed a couple of weeks later with the premiere agency.

I suspected, but still am not positive, that my first agent was only agenting part-time and working as a college professor full-time. She has since become very successful as an agent for this premiere agency. But when she was my agent she acted as if I was bothering her any time I needed to contact her. When she took me on she said she would only rep my novels. Also, with her other clients she was hands-on editorially and would critique their books, giving them revision letters. We had never discussed this aspect of the agent responsibilities. (A great many agents are editorial agents now.) However, she never suggested changes in my work. It may have been because the letters from editors were usually pretty positive, except there was always a “but,” then the rejection.

After two years came the break-up. My agent hadn’t sold anything, although I had sold a NF book on my own. I found myself dreading e-mailing her. But then there was the matter of a book that had been (supposedly) out at three editors for an entire year. When I finally ask her if she’d heard anything, she checked then found out the submissions never reached any of the three editors in the first place. I had already decided that in January I would call her and we needed to talk about the lack of communication. I knew I would probably have to end the contractual agreement. I never got to make that call. Instead that January I received a termination letter from the premiere agency. I asked for the agent’s records. When I got them, they were full of holes and to this day I don’t know if certain editors received or responded to my novels supposedly sent.

Several years and published NF books later, I looked for another agent. I was still getting editors, even from closed houses, accepting my novel submissions. Most of the time it was “close,” (but no cigar) or “not what we’re looking for.” Often the editors would send a short critique and an invitation to send something else. This time, though, what sent me in search of an agent was an editor who had me doing pre-contract revisions for a year. I solicited a “young hungry shark” agent at one of the top agencies in the U.S. and U.K. She worked with me for another year trying to close the deal, and giving me excellent revision notes on that novel—GRIDIRON GIRLS, and another, NO SURRENDER SOLDIER.

At the end of nearly a year the agent asked me to meet her at a Houston SCBWI conference. Then I immediately drove to a YA conference in Austin to meet the editor who had me doing pre-contract revisions (for about two years total) on GRIDIRON GIRLS. She agreed to buy this novel and start the acquisition process.

Early 2012, while the editor and I were waiting for contract, the YA imprint was sold by its parent publishing company. By Spring 2012 my agent had left agenting altogether. By late fall I submitted and sold NO SURRENDER SOLDIER to author Jacquelyn Mitchard, editor of a new YA imprint, Merit Press, owned by Adams Media/ F+W Media. (Merit Press/Adams Media is now Simon Pulse, Simon & Schuster)

I’m looking for an agent again. Recently, I checked out #MSWL (manuscript wish list). Four requests were from “agents” with vanity/ self-publishing companies. So, beware. I miss the Predators & Editors website.

Wouldn’t it be nice if we had speed-dating pitch sessions with agents? Or online services like Match.com? What advice do you have for agent hunting, besides making sure they are members of AAR?

Oh, Christine. We are SO in the same boat. I have pitched and pitched until my shoulder is as sore as major league pitcher throwing a shut out. Unlike you, I have never gotten close to "getting hitched" to an agent. I have been recommended to friends' agents, I've had agents ask for my work. The response has been "you're not commercial enough" and ....nothing. One was a big name from a big agency who urged me to Fed Ex my novel "overnight" costing me big bucks. Nothing. Not even an email saying she received it. I have sold 11 books on my own, some to houses that are "closed". (This is the point where I say that belonging to SCBWI can be helpful in getting read in closed places...but no guarantee.) I am the one who constantly says that getting an agent is like getting married...you don't hook up with the first person who asks. Your post has made me see that yes, getting an agent IS like getting married...and in today's world, where the term "starter marriage" implies that "till death do us part" has an escape clause..."married" doesn't mean any more than what BOTH parties invest. Yes, it's a business decision, but agents, as you have said, seem to invest the least amount of work possible for the greatest possible gain (for them). If you aren't a white-phenom before your agent signs you, your agent is most likely not going to make you one. Me...at this point, all I want is someone who can negotiate contracts so that I am not getting screwed. Gee...do you think you hit a nerve?

Thanks for being candid, Mary Ann. Btw, I'm a YANKEE GIRL fangirl! Yes, needing agents to open doors and negotiate are at the top of my list these days.

I presented to a group of writers today about the good, the bad, and the ugly in publishing, and agents came up as a popular question. Like you, I have published without one, but I believe my book would be further along with an agent having my back.

I wish I could have come to your talk today, Laura. It's nice to have a discussion with writers in such an intimate, private setting.

Your comment made me think about what the take-away could be from my article--and your and Mary Ann's astute comments. Especially if we were having this conversation with pre-published writers. I guess it would be to look for an agent, but don't give up if it doesn't happen. A lot of writers publish with traditional publishers without agents. The three of us are examples. You can still have a writing career without an agent.

For me, the goal has always been to take a step up. To step up my craft. To step up my abilities and discipline. To step up the quality of my writing and stories. And, to step up the ladder of publishers. I'm a big believer, though, that in goal-setting, I can only be responsible for what is within my power. I can set goals to write, to study, to query, to submit. But I have no power over being selected, either me or my work. I guess that would be the take-away.