Tags: Words or phrases to categorize this post for the tags section 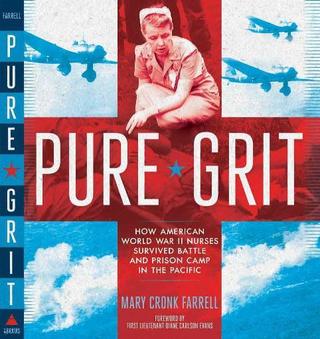 PURE GRIT: HOW AMERICAN WWII NURSES SURVIVED BATTLE AND PRISON CAMP IN THE PACIFIC is a story that was almost lost forever.

Oral histories recorded by the U.S. Department of Defense and the Army Nurse Corp became indispensable to my research for PURE GRIT. Yet, these first-hand accounts of the capture and imprisonment of American military nurses didn’t get recorded until forty years after the fact. A good number of the seventy-eight POW nurses had died before there was any effort to preserve their stories.

In 1945, when the women arrived home after their three years as POW’s in the Philippines, their superiors had them sign statements agreeing not to speak of the atrocities they had seen.

“They treated it as if it was a stigma,” said Lieutenant Colonel Hattie R. Brantley.

After four grim years of war, Americans wanted heroines to raise their spirits. They didn’t want to hear about Americans surrendering to the enemy. In the 1940’s people had no framework to understand women who had acted with courage and grit on the battlefield and as prisoners of war—in short, women who had acted like soldiers.

In 1991, Army Nurse Ethel Thor told a reporter, “I’ve never talked to anyone about it. I guess I saw so many who lost their lives—I feel it isn’t right for me to be sitting here now.”

Once looking for Christmas decorations in the attic, one of the girls found a 1942 copy of LIFE magazine with a picture of her mother assisting in surgery during the Battle of Bataan.

The eldest, Linda Bradley believes the POW nurses thought if family members heard what had happened to them during the war, either they wouldn’t believe it or they’d be horrified. Neither option could be borne.

“It’s sad. Looking back, we didn’t really know her as a person,” Linda Bradley says. “If we’d ask her questions, she’d say yes or no. But no details. If you asked her something and it made her cry, you didn’t ask her again.”

Only one of the POW nurses, Mildred Manning Dalton remained alive while I was writing PURE GRIT, and it was a great honor to interview her. She was ninety-nine this past March when she died.

Spending five years researching and writing about these brave women, going over each word of the oral histories and meeting a number of the nurses grown children, I almost feel as if I’d known them. They certainly have inspired me with their strength, courage and dedication to duty. My hope is that readers of PURE GRIT will feel the same.

PURE GRIT comes out in late February, just in time for Women’s History Month, which is March.

Thanks for hosting me, Christine! I got your book last week! Can't wait to read it!

Thanks so much for the blog article, Mary. Now that it is released (March 1) I can't wait from my copy to arrive. (I buy on-line through B&N.) Great topic! My sister is a geriatrics nurse and I applaud nurses everywhere for their dedication to helping people, despite the difficulties. >< >< >< >< (applause!)

Lonnie Martin, thank you so much for adding this article info to your e-zine WWII Discoveries & Recoveries! The flip art style of the 'zine is really clever. It gives the feeling of reading a print 'zine. Here's the link again, folks: https://flipboard.com/section/world-war-ii-discoveries-b0k81V

I'll give this WWII resource a Shout Out on other network sites.
Mahalo!
Christine

The Combat Medical Badge is an award of the United States Army which was first created in January 1945. Any member of the Army Medical Department, at the rank of Colonel or below, who is assigned or attached to a medical unit (company or smaller size) which provides medical support to a ground combat arms unit during any period in which the unit was engaged in active ground combat is eligible for the CMB.

[My apologies for delying on approving and commenting. I'm at the Tucson Festival of Books.]