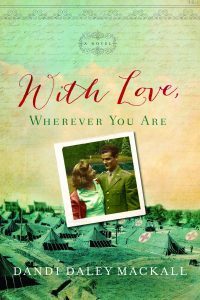 I grew up on my parents’ amazing true war stories—how Mom joined the Army as a nurse when WWII broke out and Dad signed up to report to the Army the day after he got his medical degree. Even as a kid, I could tell their stories—about meeting in boot camp, marrying after a whirlwind romance, then being shipped overseas to different countries and nothing but their letters to keep their marriage alive. Lt. Mom cared for amputees, German POWs, and concentration camp survivors, while Lt. Dad moved into Germany with a British unit and set up battalion aid tent hospitals. On top of that, they left me an Army trunk full of more than 600 of their letters, tied in bootstrings, untouched since 1945. So armed with factual material and a myriad of resources, this book should have been the easiest I’ve ever written.

I’d always worked at making my characters real. Instead, now I had to turn real people into realistic characters. I needed to transform nonfiction plots into a narrative arc that would compel readers and keep them reading until the end. Unfortunately, life seldom delivers itself in such a package.

Here are a few things I learned the hard way. Might come in handy if you find yourself swimming through an ocean of nonfiction in search of a novel.

Tip #1 -- Resolve that you are choosing to craft a story, rather than document your family’s history.

Tip #2 -- Free yourself by first documenting your family’s history. My first draft was intended for family only (including cousins). That way, I could theoretically do what I wanted with subsequent drafts.

Tip #4 -- Family stories are generally anecdotal, short and sweet (or not so sweet)—more like short stories than a novel. Decide on one major theme.

Tip #5 -- To help you find the novel’s narrative arc, ask (yourself) a major dramatic question before you start that next draft. “Will they/he/she or won’t they ______________?” You have to be able to answer Yes or No—and don’t answer it until the climax. Mine was: “Will their love, their marriage, survive the war?” Keep that question in front of you as you write.


Tip #6 -- Characters need arcs too. Will Helen come to realize that she needs other people? Will Frank discover that he…?

Tip #7 -- Keeping asking yourself: Whose story is this? Then, after you’ve worked so hard to capture your relative’s voice and heart, let it go. The first time my editor read my early draft, she smiled, said nice things. Then she handed it back: “Now rewrite this, starring young Helen and young Frank, instead of Mom and Dad.”

Tip #8 -- I wanted to put in all of my eleven favorite aunts and uncles who served in WWII. But it was too many for readers to care about. Combining or cutting characters may be the hardest job. Do it!

Tip #9 -- Craft your climax early on, even though it may change. You’ll need something to aim at. Every chapter and every scene should build to this moment. If it doesn’t, bye-bye scene.

Tip #10 -- Sculpt. Once you have that monstrous, ridiculous, oversized draft, like a rough block of clay or marble, sculpt and carve until you’ve found your novel. Then polish, polish, polish.

*CK note: Comment on this article and after the first week your name will be entered in a drawing for a free copy of an Advanced Reading Copy of WITH LOVE: WHEREVER YOU ARE. US Mainland only

★ 01/23/2017
Mackall (My Boyfriends’ Dogs) provides a fictionalized account of her parents’ World War II marriage in this well-researched page-turner. Nurse Helen Eberhart had no intention of getting married, but when she enlists in the Army to care for the wounded in 1944, she meets lieutenant and doctor Frank Daley and her plans soon change. After a quick wedding in Chicago, the two are sent to different areas of Europe for what turns out to be the final year of the war. While they manage to arrange an occasional rendezvous, most of the time they are unaware of each other’s locations and maintain their relationship through letters, writing two or three times a day and waiting eagerly for the unpredictable mail to come through. The “Story Behind the Story” and discussion guide included in the back of the book offer a fascinating look at where real life ends and fiction begins. While one might expect a story written in homage and remembrance of one’s parents to be overly sentimental and idealized, Mackall has admirably resisted that urge. Instead, she has crafted memorable, complex characters who courageously face the tragedy of war and the difficulties of cultivating a bond while separated. While the real people behind the characters pack additional punch, Mackall’s heartbreaking narrative and precise prose alone will stay with readers long after the final page. (Mar.)

A lot of good comments for those of us planning to use some of our family's history in fiction. You are telling us to do the hard thing--impersonalize it and make it a fiction story. I particularly like your suggestion to write a true non-fiction family history FIRST, to get it out of your system and so other family members who don't have access to that trunk can share in their ancestors' history. Thanks for the post.

Excellent. I wish I would have had this info when I decided to make my family's story into a novel. Fortunately I did at least some of what you mention here. I first wrote a family history, then started making it into a novel. Eventually the characters based on the real people took on lives of their own. I am still amazed at the great plot line that the real story provided. I only had to ramp up the conflict a bit and embellish the scenes, because the real life story was so dramatic and I had so many amazing anecdotes to work with.

Robyn, I agree this is excellent advice to write the true life story first. I wonder if it might also free up writers who have trouble letting go of what really happened to write what needs to happen to form a novel ARC. It might also help some writers let go of the tedious details and anecdotes that don't add to scenes and sequence. Thanks for commenting! I'll draw a name at the end of the week to win a copy of the novel!

Rose, isn't that so true! Real life is more fascinating than what our imaginations can create. It's why I believe that nonfiction research is the bedrock of fiction. (I have an article about that on my blog. It's easier to find the articles by title on the Blogletter tab.)

Your name is thrown into the drawing now. At the end of the week I'll announce who wins a copy of the novel!