CREATING IN KAIROS INSTEAD OF CHRONOS TIME 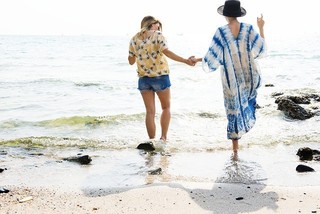 A Kairos moment
by Christine Kohler

Think back to carefree childhood activities before your parents sent you to school. You lost yourself in imaginative play, exploration, and creativity. No one set a clock and said, “You have 15 minutes to make a mud pie.” Or, “Shimmy up that tree, pretend you are Rocky the flying squirrel, then vamoose down again in 20 minutes.” (If adults did put time restraints on your imaginative play, shame on them.)

Observe a newborn and toddler amazed at the newness and wonderment of things we take for granted. Notice how they move at their own pace, without concern for adult schedules. This is true with human and four-legged young ones.

These unfettered childhood behaviors are done during a period known to the Greeks as Kairos, an appointed time, an opportune moment, or a due season.

Once children begin school, schedules are enforced. The alarm clock wakes you up, the bus arrives at a specific time, tardy bells clang. Your body is even supposed to regulate when it goes to the bathroom and what time it has to fall asleep at night. Adulthood and the work place demands more of the same.

Consider how this applies to writers. Unless you didn’t begin writing until college in a course such as technical writing, then chances are you started writing as a child because you enjoyed doing so, not for homework assignments only. I was aware by age 9, around fourth grade, that I was writing compulsively. I began writing my first novel while babysitting at about age 13. Yet, I don’t recall a teacher assigning me to write a story until my junior year in high school, at age 16. (I still have it. It’s titled “Kidnapped” and I got double As.)

So, if you were like me, and you wrote as a child out of compulsion, or for pleasure or praise, chances are that no one assigned the topics. No one gave you a deadline. No one expected you to do anything, least of all produce an entire poem, or short story, or article. Certainly not an entire novel. You wrote for the sheer joy of writing, to relay interesting information or tell a story. You wrote to express yourself. You wrote to vent, or out of loneliness, or because your imagination was overflowing with inventive ideas. (Notice I didn’t say “over-active imagination.” That term might have been made up by a curmudgeon who didn’t want to hear your fantasy stories.) For whatever reason, you wrote without being told to, without having time limits to produce a finished product. You took the opportunity to write in the perfect Kairos moment. You took a season to write your piece, if necessary, and wrote for a season until you reached an age where a teacher or boss imposed Chronos time on you.

Chronos time is imposed on writers by teachers and bosses, if you are required to write at work. I have often said that I don’t believe in writer’s block because, as a reporter, you either make your deadline or get fired. As a news reporter, I wrote three to five articles per day on deadline. And that was after spending all day outside the office gathering information and interviewing. The actual writing took place in about two hours of my workday. Educational writers also have brutal deadlines. Some novelists are expected to produce two to four full-length novels per year.

Chronos time can also be self-imposed. Those who commit to writing X-amount of words a day, or for X-amount of time per day, write on Chronos time. Those who do NaNoWriMo are writing on Chronos time. I don’t do NaNoWriMo. However, I confess that when I hack out a first draft of a novel, I usually do so in six to eight weeks, sometimes writing up to 10 hours a day. I do this self-imposed Chronos time for continuity, to get the first crappy draft down on paper (finish what I start), and because I can.

So, I am not condemning writing on Chronos time. It has its place. However, let’s not abandon seasons of Kairos. Too often I hear of writers flagellate themselves for being stuck, or taking a day, or (gasp!) a week off from writing. Instead, perhaps they should embrace the Kairos to step away the work and spend non-timed moments to meditate, contemplate on a deeper level. Or do whimsical play. Or inventive pursuits. Make mud pies out under a Bing cherry tree, if you must. Return to the unfettered activities of your youth before authoritarian figures imposed Chronos time on you.

WHAT DOES “ENJOY THE JOURNEY” REALLY MEAN?

Published authors often admonish other writers to “enjoy the journey” instead of obsessing about getting published. But what does that really mean? How does a writer really enjoy the journey when the hype is to keep their eyes on the publishing prize? Perhaps the key is in relishing the Kairos moments when we lose ourselves in our writing. When we forget about the discipline and writing rules and deadlines, and instead return inwardly to writing for the sheer joy of telling stories.

When my dad retired from Ford Motor Company, he took his watch off. He told me he no longer wanted to be dictated by a timepiece. Most writers never retire. But the body slows down. People enter a different season of life. Instead of bemoaning the limitations, embrace the Kairos moments. Write deeper, more meaningful, more playful, more fantastical. Focus on the quality instead of the quantity. Get lost in story. Create something worthy of your fullest potential.

One footnote to contemplate, if you decide to read further about the difference between Chronos and Kairos. The Greeks personified concepts. Chronos is depicted as Father Time, carrying a scythe and an hour glass. He resembles the Grim Reaper. Chronos is crazy--he eats his own son. In Christian theology, Chronos leads to death in hell. However, Kairos is the icon of everlasting life. Kairos is the concept of seasons Solomon wrote about in Ecclesiastes. It can be one small ripe, full, and perfect moment. Or it can last a season.

My New Year wish for you all is that you give yourself the gift of freedom to seize Kairos moments to take joy in the journey. May you create timeless art.

If you don’t already subscribe to my blog READ LIKE A WRITER, and would like to receive the article in your email (about once a month), then click on the BLOGLETTER tab and subscribe on the left column. I do NOT sell my list or use it for advertising purposes.  Read More
6 Comments

Thanks, Christine, for reminding writers about seasons and educating us about time.

You're welcome, Amy. May you be blessed with a joyful writing year in 2017! (I know you are always productive!)

Food for thought. Thank you, Christine and Happy New Year!

Thanks for reading, Susan. Wishing you a prosperous New Year!

Lovely article. It reflects my time of life where I'm tired of being dictated to by Chronos. It's a lovely affirmation that it is perfectly acceptable to embrace Karios moments. Indeed, I think they are richer.

Thank you, Sandy, I'm grateful it spoke to you in encouragement. I've thought about time versus seasons for about 12 years. (I used to select one concept to contemplate for the year.) I'd come to the conclusion that perhaps God intended us to live by season--Kairos--instead of Chronos time. Nomadic tribes lived by seasons. Within the last three generations technology has increased the pace at which people move through Chronos to the point that it makes one wonder about quanitative versus qualitative in life. I, too, am stepping into a place in my life and career where I want to live more by Kairos than Chronos, who can be a hard stress-inducing dictator. I hope this makes my work richer. What I'm finding, though, is that Kairos returns more joy in the journey.