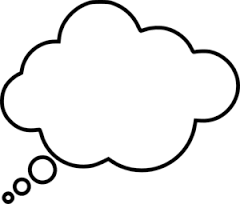 In the quest for writing character-driven stories, it is easy to fall into the trap of having a character musing to oneself too much. By musing, I'm talking about thoughts, also called internal monologue, or interior monologue.

Often writers write the first draft in too much internal monologue to get the voice and character down. This is okay in a first draft because this is the draft where you are essentially telling yourself the story. But in subsequent drafts the writer needs to flesh out description, setting, and action, developing scenes. How can you tell what to cut and what to put instead into narration, and show in actions instead?

Pretend your page is a stage and the story is going to be produced as a play. Make it a big stage with an apron downstage. Set a stool and a spotlight on the apron. Now, when you read your story out loud, every place where no action takes place and the main character launches into internal monologue, imagine your character sitting on the stool facing the audience and giving a soliloquy. Every protracted soliloquy--internal monologue on the page--stops the forward moving action (plot).

Another tip about internal monologue: Never write, she thought to herself. We all do, of course, think to ourselves. But simply write, she thought. Or, better yes, if you write the narration in your main character's voice, then "she thought" is not necessary.

Internal monologue is a literary devise that writers and editors don’t seem to agree on how to handle, even sometimes mixing styles of writing interior monologue within the same story (usually novels).

Italicize internal monologue in first person when the narrative is in third person.

Missy glances at the clock on the dashboard. She's late for cheer practice.
I'm not getting off to a good start.

Italicize internal monologue in present tense when the narrative is in past tense.

Missy glanced at the clock on the dashboard. She was late for cheer practice.
I'm not getting off to a good start.

Missy glanced at the clock on the dashboard. She was late for cheer practice. She wasn't getting off to a good start.

Missy glances at the clock on the dashboard. She's late for cheer practice. She isn't getting off to a good start.

When writing single point of view, character-driven stories--whether in third or first person--write the narrative voice in the voice of your main character. Use all of the character's senses, and show emotions through action, and you won't find yourself relying solely on the character's thoughts.

The best chapter I have found on internal monologue is in SELF-EDITING FOR FICTION WRITERS by Renni Browne and Dave King. The authors say about interior monologue, "…if your viewpoint character has a strong, distinctive voice, you will eventually see the line between interior monologue and description blur slightly. After all, your readers will know they're seeing the world through your character's eyes (from the narrative voice) and it's not a big jump from a character's eyes to a character's mind."