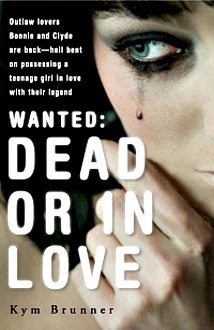 WANTED: DEAD OR IN LOVE, Merit Press, July, 2014, by Kym Brunner is a paranormal YA novel invoking the spirits of gangsters Bonnie & Clyde.

One of the questions most asked of writers is: Where do you get your ideas?

Besides just being lucky to have a deliciously fertile (read: weird) imagination, I often get ideas for new books by seeing something on TV or in the news that stirs my imagination.

That’s what happened a few years back.

I was watching the news during summer break (love this part about being a teacher!) and saw these headlines:

I was like…. there was a bandit loose and he was barefoot? What’s this all about?

When the news showed who it was, I couldn’t believe my eyes.
The Barefoot Bandit turned out to be this good-looking, clean cut, 20-year-old guy.

Really? I was even more intrigued to find out what he did and why. So I read the entire story. Find out this guy had eluded the Feds for two years. Stole small planes, sorta-kinda crash landed them, and then took off running. Barefoot no less! So my brain starts reeling and a million WHAT IF questions flood my mind.

WHAT IF….a girl was sitting on the beach when a cute guy strolls over?
WHAT IF… he starts chatting and asks for a drink?
WHAT IF… unbeknownst to her, the cute guy is the barefoot bandit, who is wanted by the police and they spend the afternoon together and she falls for him?

WHAT IF… instead of writing about the Barefoot Bandit, I wrote about a girl named Monroe who meets the ultimate bad boy in person…Clyde Barrow. Uh-oh. What would she do?

WHAT IF despite all her knowledge of what a horrible criminal he was in the past, Monroe realizes they have a LOT in common and maybe…just maybe….despite her best efforts and her strongest resolve to hate him, she admits he has some nice qualities too?

Read WANTED: DEAD OR IN LOVE…and find out what Monroe does about it.
***I know…it’s mean and cruel to leave you hanging like this, but that’s the kind of person I am. Bwhahaha!***

Bio:
Kym Brunner's method of creating a manuscript: write, procrastinate, sleep, repeat. She's addicted to Tazo chai tea latte, going to the movies, and reality TV. She's repped by Eric Myers of The Spieler Agency, who sold her debut YA magical realism novel, WANTED: DEAD OR IN LOVE, to Merit Press, due out July, 2014. When she's not reading or writing, Kym teaches 7th grade full time. She lives in Arlington Heights with her family and two baby bunny-eating monsters, a pair of Shih Tzus named Sophie and Kahlua.