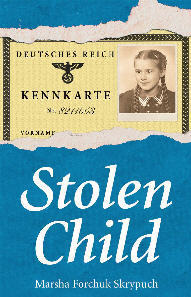 STOLEN CHILD by Marsha Skrypuch is based on a Nazi program where children were stolen and brainwashed, then reared to be part of the Ayran superrace.

My guest today is the prolific award-winning author Marsha Skrypuch. MAKING BOMBS FOR HITLER was selected as the Manitoba Young Readers’ Choice winner for 2014. Marsha is a master at writing war literature and it’s an honor to have her write this article about something very personal that prompted her to write STOLEN CHILD.

One piece of advice that writers are given is to write what we know. I disagree with that. I think it’s more important to write what you don’t know, but what you’d like to know about.

Before I became a writer, I got my Master’s degree in Library Science, not to become a librarian, but to learn what I didn’t know. Becoming a librarian helped me become a history detective. All of my books delve into some fragment of history that has been shoved under the carpet and forgotten.

Lidia, my mother-in-law, died in early 2008. A few weeks before her death she said to me, “You’ve written all these stories about bits of history that no one else has written about, but you haven’t written about what it had been like for me as a Ukrainian child in World War Two.”

Her comment stunned me, but there was much truth in it. She had told me so much her childhood, living on the Front, in the midst of where the battles were actually fought. In case you don’t know what the Front is, it’s where the two fighting armies confront each other— in this case, the Soviets and the Nazis. I asked her once how you could tell when the Front was upon you. “The ground trembles,” she said, “from the tanks.”

The Nazis moved through her home town of Zolochiv in Western Ukraine twice. Both times, they took over her house. They didn’t allow her or her parents to leave: The three were captive hosts, expected to cook and clean for the invaders. But they also listened in on conversations. Once, Lidia heard of an “Action” at her school the next day. “You’re staying home,” said her mother. When she went back two days later, all of the blonde and blued-eyed girls had been taken away, never to be seen again.

Years later, my mother-in-law found out that they were all dead. They had been taken for the “Lebensborn Program” where carefully selected Polish and Ukrainian children were stolen from their families and brainwashed into thinking they were German, then placed into high-ranking Nazi households as trophy children.

This was an aspect of World War Two that I had never heard from anyone beyond my mother-in-law. At her deathbed, I promised her that I would write about her experiences. The first novel of my WWII trilogy was Stolen Child— not about Lidia—but about a girl like one of her less fortunate classmates—stolen by the Nazis and robbed of her identity.

As I did the research for that novel, I realized how rare it was for a child to be deemed “worthy” of the Lebensborn program. The Nazis captured millions of Ukrainian and Polish children, but only a few hundred thousand were selected. The rest were labeled “not racially valuable” and were either killed outright or used as slave labour.

This fact became the inspiration for the second novel of my trilogy. What would it be like to be stolen with your sister, but separated for different fates because your sister was considered “racially valuable” while you were considered disposable?
Lida, the disposable sister, is the heroine of MAKING BOMBS FOR HITLER, the second novel of my trilogy.

While writing that novel, the character of Luka appeared, initially as nothing much more than a “wild-haired boy.” Soon, as good characters are wont to do, he took on a life of his own. Ultimately, he escaped from the slave labour camp. The third novel in the trilogy explored what he ended up doing after hiding in a wagon of corpses and jumping out in the middle of nowhere before the wagon got to the crematorium.

His story is based on real experiences as well—about the many escaped slave labourers and other survivors of the Front who just couldn’t take it anymore. They stole weapons from the Soviets and the Nazis and formed an army that hid literally under the ground. They fought the invaders on two sides—the Soviets and the Nazis—and hid under the mountains and forests. For that novel, I interviewed people who had done exactly this as children—took up arms and fought—realizing that they would likely die, but it was worth it if it meant that future generations might live in freedom.

The events unfolding in today’s Ukraine have chilling parallels to what I’ve written about in my World War Two trilogy. I pray that we are not on the brink of World War Three.

Marsha, your books are so special. You bring little-known history to life. It was hard for me to read these three books - had to do it in small doses. They reminded me of my parents' experiences during the war, and those of their friends. Kudos and admiration for what you do and how well you do it!

Orysia,
Thank you so much for your comments. These books have been emotionally difficult to write -- like opening up a vein and writing with blood -- but I'm glad I've done it because they honour some very brave WWII survivors who have received very little attention.