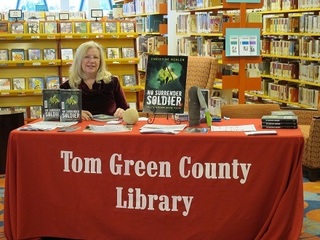 My second book launch—both at libraries one week apart—for NO SURRENDER SOLDIER’s official release was hosted by the Stephens, Tom Green County, Library in San Angelo, Texas. At my first book launch at the Carnegie Library in Ballinger I gave a research program on the history behind the book, mostly about the WWII Japanese soldier who hid on Guam for 28 years after the war ended. I prefer to do programs; (I’ll tell why in a minute). But the YA librarian wanted me to do a three-hour “meet-and-greet” book signing on the main floor where people come into the library.

The reason I prefer to do programs is so I can give something to people—a history lesson or research tips--without them feeling as if I am only there to sell books. It’s also because I value my time and I’ve done signings in bookstores with my first four books, published in 1985, where no one came or bought. Nearly all authors have had those kind of empty signings, they just don’t talk about it publicly.

Thank goodness this did not happen at my Tom Green Library book launch. After all, a launch is a party! Besides my husband and daughter, who came to handle book sales, one writer from a local writers’ group came. *blowing a kiss of thanks to Sarah* Otherwise, I talked to at least a dozen library patrons who approached my table, curious about my book.

One thing I did to increase curiosity was to bring props I use for my talk about WWII and survivalists: a cannon shell and trough, a coconut, and pictures of Shoichi Yokoi that show how he lived underground. The second thing I did was to bring bookmarks to give away free. I would make a lousy salesperson because of those who stopped at my table I told them that they could check NO SURRENDER SOLDIER out of the library, or buy the e-book on Amazon for $1.99, or enter a Goodreads give-away for a free autographed copy through January. (The library had bought five copies of my book and one was checked out before my launch. By the time I left two more copies were checked out.)

I also recommend authors not be bookstores. Ask a local bookstore to handle sales. (Note: I had made arrangements with the local Hastings in May 2013, but they renegged in December when the librarians and I were trying to finalize plans. So I had to buy the books from B&N and have them shipped to my house, and get a state tax license, then sell the books at my cost plus tax.)

When you go to events to pitch your book, you really can’t put a number on attendees or sales as to what constitutes a success. You never know if someone you talk to will buy the book later or is in a position to buy multiple copies, such as a librarian or teacher. Sometimes one invitation leads to another.

To thank the libraries for hosting my book launch parties I donated signed copies of my book. After all, I love to give back. And I especially love to support libraries. I grew up in a rural area with no libraries. That’s why I was adamant about holding my book launches in libraries in rural West Texas.

*Blowing a kiss right back at you* The props were a great addition to your table and a perfect way to start a conversation without feeling like a book saleperson. My daughter told my husband all about your coconut at dinner that night.

Thanks for these tips, Christine! I'm paying close attention and taking good notes! Good luck with your continuing presentations and signings!

I'm drawn to anything Japanese and No Surrender Soldier looks fascinating. Thanks for the tips and ideas! I agree about offering programs as part of book promotion. My publisher will launch my debut book, Feathers and Trumpets, A Story of Hildegard of Bingen in March.

Thanks for the comments & encouragement, Sarah, Martina, Linda and Joyce Ray.

Sarah, your girls, especially the tiny one, look like Precious Moments dolls! What sweeties, but with bundles of energy and curiostiy. I'm glad the coconut sparked your child's curiosity. At the other library program I had more coconuts, only pre-drilled and cracked. I had Dixie cups available for people who wanted to drink the milk. I had a butter knife for those who wanted to snap out a piece of coconut meat and eat. What I envision under different environments (outside!) is for teens to try to crack a coconut open with a rock, then spoon, then hammer and chisel. Then to squeeze oil from the meat. They will be able to see how difficult it would be to live as a survivalist. When in season, I'd like to get a full coconut still in the husk because that's even harder to open, which is what the soldier had to break through to use for milk, food, oil, and lamps.

Joyce Ray, I had never heard of Hildegard so I looked her up. Wow! This would be great NF or fiction. (Can I plug here that I'm giving one of the intensive workshops at the SCBWI summer conference in LA about NF, narrative NF, and historical fiction?) And to think this was during a time when my ancestors in (now state of) Germany were poor farmers probably working for these overlords. It's remarkable as a woman what she was able to do. I want to read more!
http://www.fordham.edu/halsall/med/hildegarde.asp

One thing my publisher wanted me to do that I haven't quite found time for is to write a NF article for a magazine about Shoichi Yokoi, the WWII soldier who hid in the jungle on which my fictional soldier Isamu Seto is based. It would be ideal for me to do this now, too, because the last soldier found in the Philippines died this month at age 91. What I have been doing instead is to write articles about my research and putting them on my website, both as a separate tab and on my blog. I wanted to do more, even including Guamanian recipes, but...marketing is eating up my time. When do we get to write? (rhetorical question for another thread. ha ha)