PUTTING MY COVER IN PERSPECTIVE 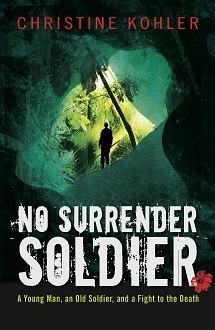 When my Merit Press editor Jackie Mitchard e-mailed me the cover of NO SURRENDER SOLDIER, without hesitation I e-mailed back, “I love it!” What I loved about the cover is the perspective. I don’t know who is the illustrator of my cover, but he or she understood both the duel perspective—two alternate point of views—and the artist’s perspective of showing the WWII Japanese soldier underground looking up at the 15-year-old Chamorro boy in the Guam jungle. I am not an artist, but my dad is an amateur artist so I understand a bit about drawing and perspective, that’s why I loved that my cover illustration has spatial and dimensional perspective.

I was also tremendously relieved when I first saw my cover. I was relieved for what was not on it. I did not get any say on my cover or book description or, initially, my author bio. NO SURRENDER SOLDIER is set on Guam during 1972 with two characters—the protagonist is a 15-year-old Chamorro boy and the antagonist is a WWII Japanese soldier. It has made me anxious in the production of this book and marketing materials, such as a trailer or audio recording, that any images or vocals or representations will accurately reflect the indigenous Pacific-Islanders—Chamorros—in the Marianas, which includes Guam. (I lived in Japan and Guam.) Because of this concern of authenticity, I have not even had a trailer made. I want to hire someone on Guam to make it. I’ve also recommended to my publisher that they hire someone from the University of Guam to record the audio book because of the pidgin English and Japanese dialects in NO SURRENDER SOLDIER. But, in the end, the publisher selects, not the author. So you can imagine my relief when my cover did not show faces or clothing. The only person on the cover is a black silhouette of the Chamorro teen as the hidden soldier might see him from the underground tunnel.

My book description has been problematic in writing because it is easy to give away too many spoilers. I wondered if the book cover would prove the same—needing a description, including spoilers, to explain what is going on in this collage of greens. However, something happened after I gave a bookmark to a teen that reminded me to trust the intelligence of my readers. The teen looked at the cover of NO SURRENDER SOLDIER and asked, “Did a bomb go off?” I realized that he could tell there was a big hole in the ground. (See, the illustrator was successful creating dimensional and spatial perspective!) I hesitated, not wanting to give away a spoiler, and said, “This hole was not caused by a bomb; it was caused by a WWII soldier who dug an underground tunnel with a cannon shell. However, there is a bomb in the story.”

Hopefully from the readers’ perspective the cover of NO SURRENDER SOLDIER will pique their interest and draw them in to read the story.