GOURMET IN YA LIT, Part IV 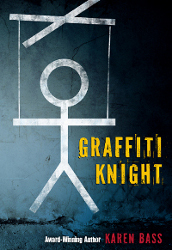 Close your eyes and imagine your perfect feast, think about those succulent dishes, steam wafting up to tease you with their delicious smells. Now pretend you’re imagining that feast when you haven’t had enough to eat for months. Anticipation becomes torture. Your stomach clenches in agony at the thought of that imaginary food.

Most people in North America have enough to eat. We can walk into a grocery store and be greeted by staggering abundance. But war, especially an all-out war like WWII, often affects food supplies, sometimes reducing them for years in heavily damaged areas— an aftermath of war we sometimes don’t think about.

I had to consider it when I set my story, GRAFFITI KNIGHT , in the small city of Leipzig, in southeast Germany, in 1947. World War Two had been over for two years. The Soviets controlled this part of Germany, and since the end of the war they had been stripping eastern Germany of its food, its factory goods, even sometimes of the factories themselves— reparations for the damage Germany had inflicted on the Soviet Union during the war.

My main character, Wilm and his friends, are sixteen, and, like all boys that age, they are hungry all the time. Worse than being hungry from simply growing, they are hungry because of rationing.

After World War Two, living conditions in Europe and Britain were grim. Massive destruction from bombing had to be cleaned up, and food production was very low for years. (In Britain, food rationing continued until 1954.) In 1947 in Germany, when GRAFFITI KNIGHT takes place, food production was down 49% from 1938 levels. The occupying powers in Germany (Britain, the U.S. and the Soviet Union) set food rations for Germans at 1040 to 1550 calories per day. On paper. In practice they were sometimes much lower.

Rationing controlled not only amounts, but also types of food: meats, oils, cheese, butter, milk, eggs, meat, and coffee. On any given week nothing might be available in a certain food group, or the allowed amount might be greatly reduced.

So Wilm and his friends have to eat mostly cheap vegetables—potatoes, turnips, cabbages—if they are available, and if their families have the cash (even with a ration card, they still had to buy their food). It shouldn’t come as a surprise then, that Wilm and his friends are obsessed with food. Thoughts about food waft through Wilm’s mind the way the smell of turkey fills a house as it cooks. He sees something he hasn’t eaten for a long time, and tries to imagine what it tastes like. He longs for chocolate, which he hasn’t had since 1945 when American soldiers controlled the city for a few months.

Obsession can twist our thoughts and actions. For Wilm, obsessing over food drives him to do some risky things. And that, too, is part of the aftermath of war.

We can be doubly thankful this Veterans’ Day in the United States and Remembrance Day in Canada: thankful to our veterans who put their lives on the line for their countries (whichever war they fought in), and thankful that, unlike Wilm, we do not live in a society ravaged by war but in one gifted with relative peace and freedom.

If you know any veterans, say thank you to them. We owe more to them than most of us will ever realize.

I love the story you're telling. It's on my TBR list.

C. Lee, GRAFFITI KNIGHTS is also definately on my to-be-read list! I can't think of a YA novel that has been set in post-WWII Germany during Soviet occupation. I used to teach h.s. English and loved to combine a junior research paper with history topics for interdisciplinary studies. This novel is perfect that fills a gap in curriculum.