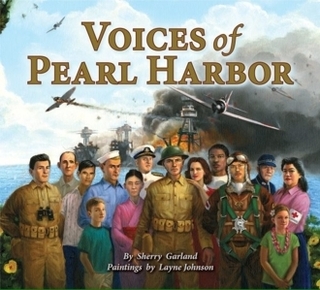 I bought pictures books for my dad for his birthday this year. He is in his late 80s. Why would I buy picture books (PB) for anyone over the age of eight? Because some PBs are what I call extreme cross-overs. They have high quality artwork. They have topics of interest to older men. (In this case, PBs about WWII.) And the text is not written for pre-schoolers.
Think coffee-table books. Think original. Think Father’s Day gifts for the fathers who have everything.
The two books I bought are VOICES OF PEARL HARBOR by Sherry Garland (Pelican, 2013) and THE POPPY LADY by Barbara Walsh (Calkins Creek, 2012). Both books are illustrated by Layne Johnson.
Layne oil painted the pictures on canvases. And not only did both authors, Barbara and Sherry, research deeply to write the texts, but Layne also researches before and during illustrating the books.
VOICES OF PEARL HARBOR
“I was eager to work on VOICES OF PEARL HARBOR because I have been a WWII buff since childhood,” illustrator Layne Johnson said, “and of course it would be a chance to work with Sherry. She's such a good writer. The paintings are done in oils on canvas and are very accurate. I visited Hawaii and went to the various locations mentioned in the book. Standing on the flight line at Wheeler at the historic attack time, I could see the Val bombers coming down, releasing their bombs. I could see the Zero fighters strafing the lined up P-40's . . . in my mind’s eye. I stood and paid respects on the Arizona Memorial. Looking down the edge of Ford Island, again I could picture Battleship Row. Being there made it real for me and hopefully, when the reader puts Sherry's words and my paintings together, they will feel like they were there too . . . and never forget that day of infamy.”
PEARL HARBOR AUTHOR SHERRY GARLAND’S STORY

"Father's Day was a day of sadness for my uncle, a quiet, stoic man who never spoke of the death of his only son in WWII,” Sherry Garland said. “I had heard about my cousin, Denver, all my life. Although he died before I was born, my mother spoke of him and even named one of my brother's after him. He was the only child, the pride and joy, of my aunt and uncle. Outgoing and funny, he was adored by everyone. Like many young Texas boys after the attack on Pearl Harbor, he entered the Army at age eighteen. He served in the Pacific theater in an amphibious tank division and died at the Battle of Okinawa when he was 21.

“Pelican Publishing asked me if I would be interested in writing a book about the attack on Pearl Harbor,” Sherry said. “Since I had already done some research about the Pacific War, I said, ‘yes.’ I originally wanted to include my cousin as a ‘Voice’ at the Battle of Okinawa, but logistics would not allow it.

“But my cousin was on my mind as I wrote the book,” Sherry said. “For example, when I wrote the October 1941 voice of the Japanese mother whose son is a pilot in the Imperial Japanese Navy training for a mission, I imagined how my aunt and uncle must have felt, the constant fear of losing an only child. In the last line, when the Japanese mother says: "All I know is that he is my only son," it was my cousin Denver who I was thinking of. In the scene of December 8, when the teenager angrily says: "Tomorrow I'll join the Army and show the world you can't push America around like this," it was my cousin I was thinking of. And in the scene of August 15, 1945, when the mother says her husband was killed at Okinawa, it was my cousin I was thinking of.

I dedicated Voices of Pearl Harbor to my cousin. I wish my gentle uncle could have lived long enough to know that. I wish I could have placed the book in his withered hands on Father's Day and said, ‘Denver's memory will live on in this story.’"

That is a beautiful picture. Takes me back to the stories I heard when I was younger of Pearl Harbor.

I have been a fan of Layne Johnson's paintings (and picture books) since I bought WHEN HORSES RUN FREE. But when I saw FARMER GEORGE, still in the F&G (fold and gather) stage, I became entranced with Layne's work. Not all artists can paint realistic portraits and even fewer as realistic as Layne. His paintings are stunning! http://www.laynejohnson.com/