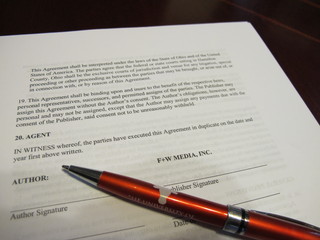 NO SURRENDER SOLDIER will be published by Merit Press Sept. - Oct. 2014.

It's official! I signed a contract with Merit Press (F+W Media) for my novel, NO SURRENDER SOLDIER. My editor is Jacquelyn Mitchard. The release date is Jan. 2014.

In keeping true to the intent of this blog I will continue to give teaching tips for writers, teachers, and librarians using books. In particular, I'm going to go through the process from beginning to end using NO SURRENDER SOLDIER and other YA books that apply to the monthly topic. So today I'll talk about the question, "Where do you get your ideas?"

Unlike nonfiction, where I start with a topic and then do heavy research, in fiction I don't always know what I'm going to write about until much later. Since fiction is more speculative to sell than nonfiction I think novelists write more toward their interests. This is true also in nonfiction topics that are not assigned by a publisher. For example, when I lived in Japan and Guam I had no idea that one day I would write a novel about the "no surrender soldier," Shoichi Yokoi , a Japanese World War II soldier who hid in Guam's jungle for 28 years. If I had known that I would write about this historical incident then I would have paid closer attention, done more on-site research, interviewed people, taken lots of pictures, and all the other things I do, especially primary research, when writing nonfiction.

It was not until 10 years after I had returned to live on the mainland U.S. that I began to write NO SURRENDER SOLDIER. Evidently Shoichi Yokoi's plight and survivalist life continued to fascinate me. I also loved Guam, our whole family did. I wanted to write about this tropical island and these warm, caring people and capture a bit of what they had gone through during World War II. I found Americans, in general, ignorant about the U.S. territories. But if this is all that I wanted to write about than I would have written a nonfiction book about Guam. No, I wanted to write about the people. So I ask myself the question that leads to novel ideas –"What if?"

And so it was on this premise that I got the idea to write NO SURRENDER SOLDIER. How do you come up with ideas when you write fiction?

The 'what if' question is one of the biggies but I find myself freguently surprised by 'breakout' characters. I'm sure you know what I'm talking about--the one that take on a life (and story!) of their own. Sometimes they don't even have to act in a story; they're simply a name. I discovered this when scanning my primary novel-in-progress. I came across just a name and the 'what if' question flashed through my mind: What if this character did show up? They would certainly raise a few eyebrows. Now what is his story? Yes, here comes another one! And I'm writing that one, too. Summation: Everyone has a story.

SE, yes, I've heard writers say that a minor character took the stage/page stronger than the main character (MC), so the writer had to give minor his/her own book!

In the case of NO SURRENDER SOLDIER, the real NSS, Yokoi, did become real to me, captured my imagination, as I tried to figure out why he would stay hidden in (under!) the jungle long after Japan lost the war. So from the very beginning, this was a character-driven novel.

Editors today say they prefer character-driven to plot-driven stories. So pull up a chair and keep listening to your characters when one wants to tell you her story.

I tend to start by mulling over a character for a story. I've been told that dialogue is one of my stronger areas. My characters talk to me, and I talk back. Makes for realistic conversation when I write it down.

Looking forward to reading this, Christine!

My ideas usually come initially from some hidden piece of history that grabs me emotionally. I get the urge to tell that story and especially how it impacted human beings at ground level. So I research a ton to find out just how the story played out and how different people fared in that context. I usually gather my major plot points from things that happened to real people in history. Not famous one. just the average person.

But the details tend to reflect my own experiences. This is where the universality of human experience comes into play. Imagining how I'd react in the same circumstances. Remembering when I felt betrayed or sad or fearful or safe and translating that into my character's experience.

It really shows in your stories, too, Joyce! Anyone who is not familiar with Joyce's novels should read BLUE and HEALING WATER. (COMFORT is in my tbr stack.) BLUE is a five-hankie read, at least. It is evident that you found the emotional core of the characters. I love HEALING WATER, set in the leper colony in Hawaii, because of my years in Hawaii and learning its history. It is evident that Joyce is a first-rate researcher by the way she transports readers into setting and historical context. Joyce, next month I'm going to post on NF, THE BEDROCK OF FICTION. I'd love it if you chime in then and tell us a bit about your research close to home. How you were challenged to find a story close to home, and that challenge led to the publication of BLUE.

That is super exciting news! It must have been a neat experience to work with the legendary Ms. Mitchard. The topic of the book is fascinating too, even if I'm not usually a history buff. My mom had some traumatic things happen during WWII which has made me more inclined to read about that time period. Congratulations!!

Thank you, Teresa! It is a huge honor to work with Jackie Mitchard. I'm hoping NO SURRENDER SOLDIER appeals to readers who don't normally read historical. I'd say the foreign setting is stronger than dating the book in 1972. Yeah, there are a few 70s references, but nothing that makes you feel as if you're sitting in a room of multi-colored shag carpet or avocado kitchen appliances. lol You'll have to read it after it comes out in Fall 2014 and see what I mean. Then you be the judge, and call me on it if I'm wrong. :-)