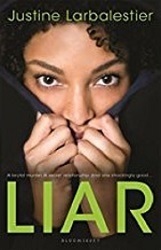 LIAR by Justine Larbalestier (Bloomsbury, 2009) is an excellent example in YA lit of an unreliable narrator.

Edgar Allen Poe was the first author to use an unreliable narrator, according to Harry Lee Poe in his biography EDGAR ALLAN POE (Metro Books, 2008). Poe used this literary device in "The Cask of Amontillado" and "Tell-Tale Heart".

For example, consider the opening "Black Cherry Eyes" by Kezi Matthews in Cicada:

Izetta was a brilliant liar. You know how they say water finds its own level? Well, Izetta certainly married into the right family when she married my father, Jack.
I come from a family of great liars. Cover-up liars….

Before citing another example of an unreliable narrator, let's look at a story in the genre of magic realism, HEAVVEN EYES by David Almond (Hodder, 2000). Magic realism combines realism and a magical element. David Almond has the challenge of convincing readers in the very beginning that the story he is about to tell is absolutely true. Almond needs readers to believe this reliable narrator in order for the reader to believe the story.

My name is Erin Law. My friends are January Car and Mouse Gullane. This is the story of what happened when we sailed away from Whitegates that Friday night. Some people will tell you that none of these things happened. They'll say they were just a dream that the three of us shared. But they did happen. We did meet Heaven Eyes on the Black Middens. We did dig the saint out of the mud. We did find Grampa's treasures and his secrets. We did see Grampa return to the river. And we did bring Heaven Eyes home with us. She lives happily here among us. People will tell you that this is not Heaven Eyes. They'll say she's just another damaged child like ourselves. But she is Heaven Eyes. You'll know her easily. Look at her toes and fingers. Listen to her strange sweet voice. Watch how she seems to see through all the darkness in the world to the joy that lies beneath. It is her. These things happened. January, Mouse and I were there to see them all. Everything is true. So listen.

Notice how Almond goes to such great lengths to convince the reader this did happen. Notice, also, where the author uses present tense and where he uses past tense. Then go back and read again and take note where he uses the third person personal pronoun "we" as opposed to third person impersonal "people." And how finally the narrator addresses the individual as "You," as if saying to the reader, You are not one of those people who don't believe in Heaven Eyes. "You'll know her easily. (You) Look at her toes…(You)…listen."

(And we do! Almond is a brilliant storyteller on so many levels.)

PROMISE
I was born with a light covering of fur.
After three days it had all fallen off, but the damage was done. My mother stopped trusting my father because it was a family condition he had not told her about. One of the many omissions and lies.
My father is a liar and so am I.
But I'm going to stop. I have to stop. I will tell you my story and I will tell it straight. No lies, no omissions.
That's my promise.
This time I truly mean it.

And so, in this opening, do we believe the narrator's promise? The fact that there is a question in the reader's mind tips us off that this will probably be an unreliable narrator. Without giving a spoiler, LIAR is the only book where when I got to the ending I was not sure what to believe and what not to believe. But in my opinion, this ambivalence is what the author intended. And so Justine Larbalestier succeeded. And this makes LIAR an excellent book for classroom discussion.

In the adult market, GIRL ON THE TRAIN by Paula Hawkins is an excellent example of not only an unreliable narrator, but two of the secondary characters who are unreliable witnesses/perspectives. Hawkins gave the main character the character flaw of alcoholism, and she is unreliable because she has blackouts and secrets. Both are brilliant reasons for her unreliability.

Please chime in with other examples of unreliable narrators. Do you love them, or love to hate them, like an antihero?

I realize fiction is by its nature not fact, but it still needs to contain truth, IMO. I've been conned, lied to for good and bad reasons, sometimes I base decisions on what I'm told. Once I catch a liar I never trust them again, and that carries over to my reading. Don't enjoy being deceived by a person in my life, or by an author.
Your blog does a good job of presenting this lesson for writers, makes it all clear. This felt reliable. Well done.

I recently picked up Bret Easton Ellis's AMERICAN PSYCHO at a used-book sale, not knowing about its grisly, graphic violence. The narrator's unreliability isn't made clear on p. 1, but I had a growing suspicion as I read stream-of-consciousness contradictions that the crimes hadn't actually happened and were the fantasies of a delusional psychotic. But maybe not. We never find out for sure.

Jackie, did you feel satisfied or unsettled at the end of the story? Did you ever sympathize with the main character?

I wonder if the narrator was an unsympathetic character throughout?

This is why I don't like anti-heroes, especially in children's lit. The author works at making a disreputable character sympathetic to the reader. If the reader identifies with the character, then it's easy to cross the line in our own moral judgements to justify immoral actions.

Actually, I felt creeped out at the end of American Psycho. The main character portrays himself as a wealthy young investment banker, but by the story's end I wasn't even sure if that was the truth. The book is a head game, for sure, and a brilliant example of an unreliable narrator.

Thanks for telling us about this example, Jackie. I'll pass reading this adult novel because of the "grisly graphic details." I don't watch "Hannibal Lector" type movies--can't stand the nightmares. I'm a very visual person.

However, I looked up AMERICAN PSYCHO and found some interesting info about it that may weigh differently for others trying to decide whether to read it:

1. It's a social commentary. The violence is not meant to be gratuitous, but rather a reflection of the violence in our present day society.

2. It's curious that S&S cancelled the contract. I don't know what stage this happened. Or if it happened because of controversy. The author ended up getting Vintage to publish his novel.

3. It's part of a series. A movie was made from the novel.

I love unreliable narrators. They make me think as I read. The world of the story (and reality) is filtered through the narrator and it's up the the reader to decide what is true and what isn't. A good writer will leave clues for the reader, but this doesn't necessarily mean that there is a conclusive answer. In Poe's "Ligeia" the narrator, in telling his story, unintentionally gives clues about his mental state. Here's a man who has no clue where or how he met his beloved wife Ligeia. Hmm. I can overlook a little forgetfulness, but this isn't normal. But Ligeia isn't exactly normal--the narrator portrays her as a living mystery, larger than life, steeped in arcane knowledge, a woman who seems to control all aspects of his life. We learn later that he uses opium which certainly casts his perception of reality into question. Ligeia becomes ill then dies and he marries Rowena, whom he claims to loathe. She falls ill as well and is mysteriously poisoned? Or is she? The narrator claims that he saw the drop fall out of thin air into Rowena's glass.How is the reader to interpret this? Later Rowena dies, but seems to metamorphose into his dead wife Ligeia, whose will the narrator believed extended beyond the grave. Is the narrator crazy? Is the opium to blame? Or did it really happen as he claims? What is real and what isn't?

I have not read Poe's "Ligeia" but you make me want to, Jo Ann! I would think the rules for unreliable characters in adult lit might be different than children's lit, even YA. In children's lit writing can't be as oblique/obscure/subtle. However, YA is rapidly becoming more like adult lit, so I wouldn't say 'never.'

I read YOU DON'T KNOW ME by David Klass for an ALAN panel I'll be on Nov. 2013 at NCTE in Boston. It has an unreliable narrator. btw, I loved the book.

One unreliable narrator is a dog, the lovable cow dog Hank who tells us how wonderful he is at solving problems. (Hank the Cowdog series.)