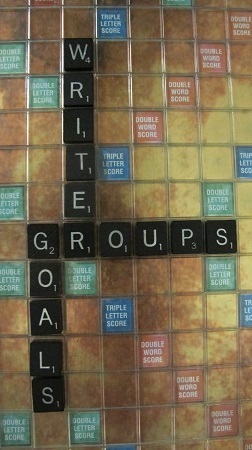 As you set your New Year writing goals, decide whether a writing group would help you reach quicker your end goals, such as producing a polished publishable-quality manuscript. Also consider carefully what type of writing group would best help you take your writing up notches. I began my professional writing career more than 30 years ago. But I didn’t join writing groups until nearly two decades ago, when I started writing novels. Here are a variety of types of writing groups I joined, and some pros and cons to each, based on my experiences:

The first group I joined was a writing guild in the large city where I lived. Shortly after joining, I became director of children’s literature and on the guild board. After each monthly meeting, which included a guest speaker addressing a writing or publishing topic, genre groups (NF, fiction, poetry, children’s lit) went into different rooms for critiques, monitored by a leader. An advantage to this type of organization is pooling resources to get the best speakers, such as Rick Riordan and Jay Brandon, and hold an annual or semi-annual writing workshop. Another pro was that writers were not committed to one genre group, and would go to whichever group they wanted manuscript feedback on that particular month. The disadvantage was the limited time for critique after a regular meeting.

After a year at the writers’ guild I learned about the Society of Children’s Book Writers and Illustrators, which I joined and attended in addition to the guild. SCBWI and other writers’ organizations (Romance Writers’ of America, Mystery Writers’ of America, Sisters in Crime, etc.) may function similarly as the guilds. If you are not getting enough critique time, then tap into your local chapter memberships to form a small private critique group that meets separately from the regular organizational meetings. This is what I was able to do with SCBWI, forming that first critique group with three members of the guild (who also joined SCBWI) and two SCBWI members.

After a number of years being in a critique group, we decided to change our focus and format. There were six of us, and we all had writing, education, English, or art degrees ranging from undergrad to doctorates. Our purpose was still to write publishable-quality novels, but our focus shifted to studying craft with the end-goal of taking our writing up notches.

We wrote a list of topics based on what we each felt were our weak points or what we wanted a better understand of, such as theme, beginnings, subjective versus objective, sensory details, voice, etc. For an entire month everyone would self-study the selected topic. During the monthly meeting, one person would moderate the group and we would each take turns sharing our findings. We each brought hand-outs with sources, quotes, explanations—whatever was necessary to explain that particular writing craft topic.

We also used examples from middle grade (MG) and young adult (YA) novels because we all adhered to the philosophy to READ LIKE A WRITER (which is what I named this blog). I loved this group, but we only met for a year because of personal schedules changing. (The one leader with a doctorate went back for an MFA in writing children’s literature.)

When the self-study workshop group dissolved, I did not go back to finding nor forming a critique group for a number of reasons. In a critique group for novelists there are challenges with getting a global (whole novel) viewpoint when it has been critiqued chapter by chapter. Even if the critique group allows for one or two whole novel reads a year, the critiquers often can’t see a global view clearly because they have been influenced by being involved in the process and seeing the manuscript repeatedly in piecework. Instead I partnered with one critique partner online. She’s an expat American who married a foreigner and teaches at a university in Asia. She advertised for a critique partner through the SCBWI site. I was impressed that she interviewed me. I wondered how to find a compatible critiquer online.

We became friends, and, after we quit critiquing together, we formed an online goals group with two other writers. We send week-end round-robin e-mails, starting Friday. (We rarely post during the weekdays.) At New Years we all post our writing goals for that year. Each weekend we post what we accomplished in our writing careers (writing, submitting, events, etc.). And we post our goals for the next week. At the end of the year we go back to our yearly goals and see what we’ve accomplished, didn’t get to or done, and any bonuses we did that was not on the list. We have developed a tight trusting relationship in this group over the past decade. Last year I finally met one of the members, my original online critique partner, in LA at the annual international SCBWI conference.

I went years again without a critique partner or group. A couple of years ago I resorted to whole novel swaps with other published authors. I have found at least three beta readers lead to an objective and thorough revision. But I don’t give it to all three readers at once. I give my completed manuscript to one beta reader, do a revision based on the feedback, then send to another beta reader, do another revision, then a third, and another deep revision. This greatly speeds up the process of polishing a manuscript.

Another advantage to swaps is that you are not tied to one person or group. Just as in the guilds, where writers had the option to take their manuscripts to specific genre critique groups, you can request an author who specializes in the same subgenre critique of your new novel. When I contact author-friends to request a swap, I always ask if their schedule permits it, and give a specific advance date in which my manuscript will be ready for reading. Keep in mind that writers under contract are under intense deadline pressure. I would never expect an author on deadline to agree to critique for me. So if the author can’t at that time, it’s to be expected. You go into requesting a swap with that pragmatic attitude. It is not personal if they can’t, it’s a time-management business decision.

I will confess that when I see photos on Facebook and read book acknowledgements crowing about the closeness of critiquers, I’m a bit envious. I just spent nearly eight years in near-isolation in a little country town, so the last year I joined a group of writers in a neighboring town as often as possible, more for the socialization than the critiques—although they were very thoughtful, even though not in their genres. (I love these intelligent creative writers!)

I moved this past Christmastime to near large cities again. There is a thriving SCBWI chapter. And I have many long-term writer-friends in this metro-plex. So I’m considering once again coming full-circle and joining a critique group. Only I will still do self-study and use beta readers. I will also continue with my encouraging online goals group pals for as long as they want to continue.

I hope this blog READ LIKE A WRITER has been an encouragement, and instructional, in helping you make your goals and improving your writing craft. *tossing confetti* Happy New Year!

Great blog. For writers who are Christian, there is also the American Christian Fiction Writers. On the national level the resources are endless for many of the types of groups you mentioned. There are also many local chapters which provide social contact. Always great to associate with those who "get" you.

Thanks for adding this ACFW resource, Jenny. It's a great organization. I attended a national Christian writing conference at Mt. Hermon, CA, one year and found the format to be one of the best because it allowed for accessibility to editors and agents. Everyone was very candid, too, and friendly. Glad you've been able to tap into this group. Best wishes on your writing this year.