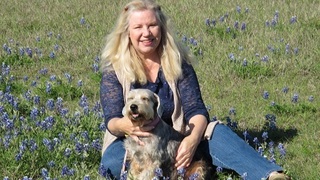 In playwriting class my professor advised to never put animals or children in your plays because they are unpredictable. However, in middle grade and young adult novels, animals not only often star in the stories, but may even increase sales. One of my favorites in realistic fiction is MG novel BECAUSE OF WINN-DIXIE by Kate DiCamillo.

When I was teaching writing, one of the biggest problem writers had with including an animal in their stories was dropping the animal from too many scenes. The animal would show up early on, then it would disappear unless it was needed for a plot point. So, after your first crappy draft, go back through and make sure the animal doesn’t disappear from scenes where that animal should be in that setting.

Another problem is if the animal is just there, but doesn’t contribute anything to the story. An animal is like any other character, it needs to have an integral part or cut it.

For example, Kiko’s boonie dog Bobo was an important character in NO SURRENDER SOLDIER (Merit Press, 2014). Bobo served as a responsibility to over-burdened Kiko, and a companion to play baseball with and talk to. Bobo’s sense of smell, and tracking skills, were paramount to building suspense, and anger in Kiko, and ultimately the climax of the plot. Reader’s also reacted emotionally to Bobo, in some cases stronger than they did to the human characters.

In Kym Brunner's humorous YA romance, ONE SMART COOKIE (Omnific Publishing, 2014), her main character, sixteen-year-old Sophie Dumbrowski, yearns to own the adorable kitten at the pet store where she works, but when her co-worker boyfriend steals it for her, she's not sure what to do about it. In Brunner's coming of age YA, FLIP THE BIRD (HMH Books for Young Readers, Fall, 2016), a teen falconer apprentice must keep the love of his hawk, Flip, a secret from his first real girlfriend, a girl whose family of animal rights activists believes that animal ownership is akin to animal cruelty.

Besides pets, animals can serve other purposes in novels, such as birds act off-page as a catalyst to the plot in PANDEMIC (Sky Pony Press, 2014) by Yvonne Ventresca involving a deadly bird flu.

Animals can also serve a symbolic purpose, such as Simon the pig in NO SURRENDER SOLDIER and LORD OF THE FLIES by William Golding. In my opinion, much of U.S. society is missing coming-of-age rituals to signify passing from boyhood to manhood, so this was what I choose to convey that symbolism in a tangible way--and paralleled it with Seto's manhood Shinto ritual in cold water (baptism; Kiko was baptized in urine and blood).

I just finished one novel with a kitten that’s a good mouser in it, and I’m overhauling another novel with a toy French poodle. I confess, dogs are easier for me to write because I have had dogs most of my life, and only had one indoor cat, not counting feral cats in neighborhoods. Since I write realistic fiction, one time when my family got a new dog, I started a “dog log,” where I kept track of the puppy’s behavior, and also recorded behavior of Snowball (Yuki Dadama in Japanese), the white mixed terrier our family had for 15 years as we lived throughout Pacific-Asia and the United States. (The new puppy’s behavior triggered my memory as to what our beloved Snowball, who was deceased, used to do.)

I recorded house breaking, potty patterns, discipline methods (training changed over the years), where they slept (Snowball at the bottom of our bed; Luke in a box in the laundry room); attitudes toward water in baths and swimming, methods of play, grooming, etc.

Here’s one entry: Luke has sharp puppy teeth, little fangs with razor sharp, pinpricks when he nips at your feet. Snowball only licked. The kids used to let Snowball lick them in the mouth after saying, “Gimme kiss.” Yuck. I trained him to only kiss me on the ear.

And another entry in my dog log: Luke, being a chewer, wants to get under my computer and sewing machine when I work and chew on the cords. That’s why right now my toes are flexed up like I’m peering over something so Luke doesn’t fall off my lap while I type this. He is propped up by the keyboard table so his silky black and white coat doesn’t slid him right off my bare thighs, past my knees and plop, onto the floor.

And another: Snowball pulled toilet paper off the roll. He also ate clean toilet paper. Even when he got older he would take a nip or two off the roll just for old time’s sake.
So, you can tell from these entries that even the same type of animal has different personalities and habits and behaviors. An animal does more than get petted, rub against the owner, bark or meow or chirp, and eat or need let outside. Observing an animal and taking notes, like you might for a child to nail age appropriate behavior, is a great way to remind yourself of other behaviors to include.

This was a great post, Christine. I am an author and I write middle grade fantasy. I write with a bit of a twist in that I also aim to educate as I entertain. Some of the animals in my stories are endangered animals of Australia. At the back of the books there is a glossary that provided tidbits of information about the flora and fauna mentioned within the story.

My inspiration comes from the land down under, but such wonderful authors as, Kipling, Beatrix Potter, and Brian Jacques, also played an important part.
http://bit.ly/TGoSprint

Thank you, Jeanne! I looked at your website http://warriorechidna.blogspot.com and Facebook book page https://www.facebook.com/AustralianFantasyAdventures/ and you have stunning photos and illustrations of Australian creatures. Are you the illustrator, too? Marvelous artwork!

I have never written stories with non-humans as the main characters; it must be quite challenging. When I used to teach writing for the Institute of Children's Literature (ICL) I advised students writing animal characters to still use behaviors inherent to those animals/birds/creatures. So I hope my article is helpful to all who write non-human characters.

Hi, Christine, my illustrator is located in London, England. His Name is Guy Atherfold, and he is brilliant. He knows exactly what I'm envisioning for my animals, and depicts them in personality flawlessly. http://www.guyatherfold.co.uk
My animals are very 'human.' They have human flaws and strengths just like people.