NO NANOWRIMO? NO GUILT! 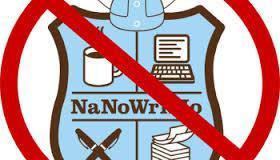 NANONANOBOOBOO is what I jokingly call NANOWRIMO. And if you don’t make your word count, NANONANOBOOHOO.

If you don’t know that NANOWRIMO stands for National Novel Writing Month then you’ve probably never taken this challenge to write a novel of 50,000 words in one month. (I had to Google the website to see the word count because I have never done NANAOWRIMO.) That’s almost 2,000 words a day. That wouldn’t be a problem for me, if it didn’t happen in November.

For me November means Veteran’s Day and Thanksgiving. My husband is a veteran so he is often off work and celebrated that day. On Thanksgiving we often have airmen or foreign students over for a day of dinner and football. November is also the month I write Christmas cards and the annual newsletter, and finish holiday shopping. That’s a lot of days I can’t produce 2k words a day during Novel-ember month—my best efforts would go up in smoke.

Long before I ever heard of NANOWRIMO, I struggled with carving out writing time during the months of November through January because of holidays, my children off school, husband off work, and family schedules. Once, in frustration, I asked my friend Jane Yolen what to do. I figured if anyone would know, this prolific author could steer me right. Jane said to do shorter works, such as poems, short stories, picture books.

In time, after my children left home, my schedules became less dependent on family schedules. I can now work on novels during the family holiday months. Yet, still, I have no desire to do NANOWRIMO. Maybe it’s a resistance to forced daily deadlines after working so many years as a reporter. (I used to write up to five articles a day, usually in a two-hour period if the legislature was in session.) Maybe it’s because I can and have written 60,000-word novels in four-to-six weeks—just not in November or December. Maybe it’s because I’m too deep into revisions and word count isn’t an issue.

In the past several years I have heard a lot of praise for NANOWRIMO writers who became published novelists. This may be a chicken-and-egg conundrum as to which came first, cause and effect, but I find it ironic that November is also the National Month of Sandwich Day, Candy Day, Stress Awareness Day, Donut Day, Men Make Dinner Day, Nachos Day, Bittersweet Chocolate with Almonds Day (this one must be for mystery writers brewing up arsenic recipes), Cappuccino Day, Harvey Wallbanger Day, Vanilla Cupcake Day, Sundae Day, Pizza and the Works Except Anchovies Day, Indian Pudding Day, Pickle Day (doesn’t specify if the pickle is a food or plot problems), Spicy Guacamole Day, World Diabetes Day (with a diet like this, it’s no wonder), Bundt Day, Spicy Hermit Cookie Day, Fast Food Day, Raisin Bran Day, and Clean Out Your Refrigerator Day (which at my house is the weekend after Thanksgiving during football games.) There is also a Take a Hike Day, and although I did not nominate this one for NANONAOBOOBOO, I should have.

So if you have not participated in NANOWRIMO, or if you have tried it—BOOBOO--and felt as if you failed—BOOHOO--, or wonder what’s wrong with you for not jumping on the bandwagon--NANONANO, you are not alone. *raising my hand* It doesn’t mean you are a failure. And it doesn’t mean you won’t become a published novelist. It means you are marching to a different drummer, on a different schedule, and, judging by the amount of people doing NANOWRIMO, maybe you and I are on the road not taken.

I agree!!!
I tried to make my book effort (part of a series) fit into the Nano format one year. With great struggle, it worked. At the end of the month I had no more useful manuscript art and writing than if I'd just worked on my own schedule.
Nanowrimo doesn't intrigue me anymore.

Thanks for sharing your experience, Ruth. btw, I'm a fan of your books and artwork!

I've heard testimonies where it does work for some writers. But as a former writing instructor for nearly a decade, I'm concerned about all of the frustrated writers who feel like failures, as if this is the BIG TEST to becoming a professional (i.e. published and paid) writer. Nonsense! One month doesn't make or break a long-term career writing. And, in my experience, November through January are the worst months to put this pressure on writers and families.

Thank you, Christine. :)
You're right. Nano is not a true test of ability to manage the writing life.
Now, if they came up with a five month revisions challenge, that's something I could get behind.

Ruth, if you hear of a five-month revision challenge, let me know. I'll sign up for that one, too.