WHEN I OFFERED MY WRITING BOOK FREE 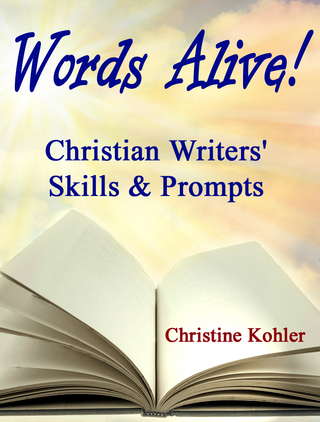 Words Alive! Christian Writers Skills & Prompts by Christine Kohler is instructional for any writers, especially those who specialize in biblical writing. It is ideal for supplementing homeschool and Christian school curriculums.

Thanks to everyone who downloaded WORDS ALIVE! CHRISTIAN WRITERS SKILLS & PROMPTS on Amazon’s Kindle during the free week Aug. 7-11.

One author, Karen, contacted me and found mistakes in the copy. I apologize. I could give half-a-dozen excuses, but they would be just that—excuses. The buck stops with me, as Teddy Roosevelt said. I felt awful, as if I understood what it meant for the first time to be caught with egg on my face in public. The author was kind enough to mail me editing notes she made while going through my writing book. I made the corrections immediately. Anyone who downloaded WORDS ALIVE! at any time, please e-mail me at ckohler@christinekohlerbooks.com and I will send you a corrected Edition 2.

When I uploaded WORDS ALIVE! Edition 2 was to lower the cost from $7.99 down to $5.99. At the higher cost I made on average $5 a sale, and now I will probably only make about $2 a sale. The reason I did this free promotion was because after 10 years sales had slowed down. So, I decided to let Amazon try to generate more interest.

My goal was to get 50 reviews. I know that’s something out of my control and shouldn’t even be on a goal list. However—ta-da!—exactly 50 people downloaded WORDS ALIVE! during the free week.

In lending library, 184 people read WORDS ALIVE! However, the stats read zero income. A note showed that my book was possibly not enrolled in KDP. But if it isn't, then it shouldn't have been available in the lending library program. I only agreed (checked box) to the lending library because when I signed up for the free week & fluctuating prices, the fine print said I would get a percentage of the lending library fees. As a result, I am totally baffled and not sure how to go in and change anything in the agreement. It's for 90 days, and then I'm supposed to re-visit it. (Can you tell this is my one and only self-published book? The experience does not make me want to ever self-published, except writing books.)

My other goal was to improve my ranking on Amazon. Here’s the best stats it got to:
#5,000+ overall ranking
#13 education & reference
#22 religion & spirituality
#22 teacher resources

A side benefit I hadn’t anticipated was that viewers of my blog doubled the highest readership I’d ever had, a June 2018 article I wrote about “Confession Literature”.

So far I’ve gotten one new review. However, several people contacted me and said they plan to write one. I’m confident that from the 50 downloads, I will get more reviews. But possibly not enough to give WORDS ALIVE! more visibility in promotion. I’ve read where Amazon’s two benchmark numbers are 25 and 50 to give more weighted promotion.

Here is the wonderful review WORDS ALIVE! received from Chris in NM:

Prompts are short ideas or triggers that help a writer get started. But this book does so much more. Each prompt is related to a skill, from poetic concepts, to important writing skills such as character and plot development, to research and interviewing for nonfiction. There's a prompt for each week, which also encourages discipline and regular practice, very important writerly skills! This is a great book for beginners who want to get started but aren't sure how, or intermediate writers who want to expand their repertoire, or people who've taken a break from writing who want a way to get back to it.

Thanks to Chris and Karen and for everyone who has helped me with this project! I feel so blessed to be part of a supportive writing community! Please e-mail if you downloaded a copy of WORDS ALIVE! I would feel so much better knowing you have the up-dated Edition 2.
Read More