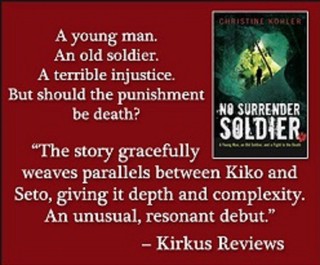 NO SURRENDER SOLDIER is told in two points of view--that of the WWII Japanese soldier who hid for 28 years on Guam and that of 15-year-old Kiko whose family suffered an atrocity during WWII.

ADULT NOVELS
In adult novels, authors often use multiple POVs. Some writers even head-hop within the same
chapters. (I, personally, do not like head-hopping.) Two examples where multiple POVs are used in adult books and it is more defined, but in my opinion messes up in the endings, are BALZAC AND THE CHINESE SEAMSTRESS by Dai Sijie and THE CAPTAIN AND THE ENEMY, a novella that could be classified as YA, by Graham Greene. I love all of Greene's other novels, especially THE POWER AND THE GLORY, but imho THE CAPTAIN doesn't work because toward the end the main character (MC) dies. That's why he has to switch POV. In BALZAC I don't like how at the end he switches to minor character's POVs. To me, it was like, who cares? What does this add?

MG & YA NOVELS
In children's lit, editors insist on single POV, or separating multiple POVs into different chapters. In MG & YA novels, if the author decides the story is best told in multiple POVs, then not only do the chapters need to be done separately, but alternating. Editors are concerned one character will be dropped too long and readers won’t care about the character whose POV is dropped.

One challenge in writing multiple POV is to make the different voices and characters very, very distinct. Adding to the distinctly different voices, you can change tenses and/or person (first or third).

In Linda Sue Park's historical MG novel MY NAME WAS KEOKO, one sibling POV is in present tense and one is in past tense. I do something similar in GRIDIRON GIRLS with three POVS. The two football girls' POV chapters are in present tense and Missy the cheerleader's POV chapters are in past tense. The football kicker, Lupe, is Hispanic, so she does not use contractions in her speech— dialogue, internal monologue, and narrative –and her sentence constructions are often reversed since she is ESL. Whereas in the quarterback’s chapters, Dallas not only uses contractions but a strong West Texas dialect. By writing Missy’s chapters in past tense then she can cover the same time frame as Lupe and Dallas’ accounts, which are in sequential “real time.”

SKINHUNGER by Kathleen Duey is a stunning YA fantasy novel in two POVs. Kathleen does a fascinating thing with time. I read this novel twice. The first time it took me part way into the novel to realize the one POV is past, leading up to the resurrection of magic. This is really hard to explain unless you have read SKINHUNGER because Kathleen does it in a way totally different than most present tense/past tense POVs. [Note: SACRED SCARS is the second in the “Resurrection of Magic” trilogy by Simon and Schuster.]

The MG historical novel that possibly holds the record for the most POVs is BAT 6 by Virginia Euwer Wolff, told in 21 POVs by two opposing girls’ baseball teams.

REASONS FOR MULITPLE POV
NO SURRENDER SOLDIER, tbr Jan. 2014 by Merit Press, is told in two POVs because the WWII soldier, Isamu Seto, is hiding in the jungle. In 1972, when Kiko’s story takes place, no one knows the soldier exists. If I had told the story in a single POV, then it might have still been suspenseful for Kiko to discover the soldier, but I would not have been able to show the reader how and why Seto hid and survived for 28 years in the jungle. Both POVs are in past tense since this is a historical novel.

In the YA sci-fi thriller NOW THAT YOU'RE HERE, tbr December 2014 by Knopf, author Amy Nichols uses two POVs, alternate chapters from Danny Ogden and Eevee Solomon. Both are in first person, present tense. However, since the characters are different genders, their voices are distinctly different. Here’s how Amy arrived at the decision to write her novel in two POVs:

[Amy says] I initially wrote it in a single first person POV (the female character in the story), but found it very limiting. I switched to third person briefly, but that also didn't work. Personally, I don't like reading third person omniscient (i.e., head hopping). If I write in third person, I typically stay very close to one character, so writing in third person just gave me another kind of first person, which still felt very limited. Then I remembered how Lauren Baratz-Logsted wrote CRAZY BEAUTIFUL, with two alternating POVs, and I decided to give it a try. The minute I started writing the boy's POV, I knew it was the right decision for this story. Because the characters are each experiencing such drastic and personal life changes, it made sense that getting both sides of the story and experience would make for a deeper, more satisfying read. [end quote]

I've been thinking about this a lot as I finish polishing my own MS. I write in third person and stay closest to my main character, but I like to move closer to my other two mains as the story progresses and we get to know them more. I've often found alternating POVs to be very jarring...I get emotionally invested in the first POV and then suddenly they're gone for a third or half of the book and that always really bothers me. I really like the way Maggie Stiefvater did her Wolves trilogy with alternating POV chapters...short enough that I could always hold the flavour of the previous POV with me emotionally as I read the current.

Hope, this is a very well-thought-out comment. I totally agree with you. I don't like it either when a primary character is dropped too long.

I don't know if I made it clear in my article, but there is still one dominant main character in multiple POV stories. Usually it is the first character to lead the story. I broke with this in NO SURRENDER SOLDIER because I needed the prologue to be 28 years earlier, during WWII. Whereas the main character is Kiko, a 15-year-old Chamorro boy. (I plan to write about prologues, hopefully in June.)

I have not read the wolf trilogy, but I have a teen reader I
plan to recommend it to. She loves wolf stories! Thanks! But I also totally agree to make chapters short, if possible.

I have a thumb-rule (meaning it is not set in cement) to make all chapters in MG & YA lit no longer than seven pages. In YA there are chapters that will creep up to 10 pages. But if it get to 12-13 then I try hard to cut that chapter. Or break it into two chapters. Or break up the chapter with asterisks/wingbats. My one chapter in NO SURRENDER SOLDIER is like that when the two POVs merge.

Thank you for commenting and best wishes on your novel!

Multiple points of view are more difficult to write. But the lazy eye and short attention span of the modern reader and current writing advice encourage writers to avoid them. I think it is purely a taste question. I find multiple points of view refreshing and not all that challenging to follow. A tight one-POV third person narrative may keep readers arguing ad nauseum about questions of unreliable narrator and what the author intended the truth to be. If that turns you on as a reader and a writer go for a single POV. I prefer the broader perspective available through multiple viewpoints.

Thank you for these thoughtful comments, Oshun. Recently I read two novels that will release in 2014 in multiple POVs. The first one was in 2 POVs, both in third person. But what bothered me a bit about this novel is that there were only about 4 random chapters out of 43 chapters from the girl's POV, and all the rest were from the male protagonist's POV. It made me feel as if the author could not figure out how to show what was happening "back at the ranch," as they used to say in Westerns.

The second (adult) book I didn't finish. Both alternating POV chapters were in first person present tense. This made the voices too similar and I was constantly trying to figure out if it was the man or woman's chapter.

So, while I agree with you that multiple POV can fe fascinating to read for a more complete picture without using omniscient, in this article I'm speaking to writers as to how to do it effectively.

Hi Christine! Really appreciate your insight! My MG novel, By the Grace of Todd is written in four POVs. I explain how I made that work here: http://onefourkidlit.wordpress.com/2014/05/28/juggling-multiple-points-of-view/

Thank you, Louise! I know writers will appreciate another MG novel to read (enjoy!) and study as an example in multiple POV. I agree with you that it is very important to make the voices distinct.

I played around with tenses and POV before settling on 2 present tense. WHo knows. By the time an agent/editor accepts the ms…maybe it'll switch again! But I do like the immediacy it is affording me.