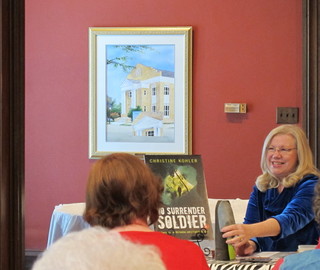 Christine Kohler talks about the research behind her novel during the book launch of NO SURRENDER SOLDIER. The painting in this photo is of the Carnegie Library in Ballinger, Texas.

Fellow Merit Press author Steve Parlato (THE NAMESAKE, released Jan. 18, 2013) said that during this past year since his debut novel released that every event has been like birthdays and Christmases  Read More