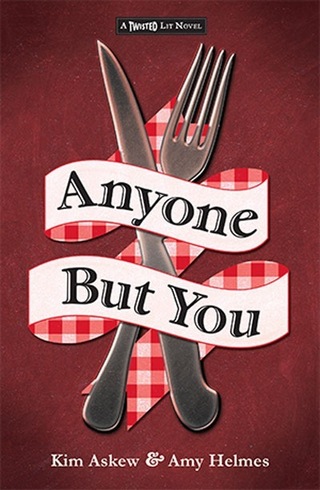 ANYONE BUT YOU by Kim Askew & Amy Helmes (Merit Press, Jan. 2014) is a retold ROMEO & JULIET set partly in 1930s Chicago in Italian restaurants.

Guest Post by Kim Askew and Amy Helmes, authors of ANYONE BUT YOU (Twisted Lit #3, Merit Press)

ANYONE BUT YOU, the third installment of our Twisted Lit series of Shakespeare retellings, is set in Chicago’s Little Italy, a neighborhood that runs along Taylor Street in the city’s Near West side. Being neither Chicago natives nor Italians, we knew it would take some extra work to make sure our narrative rang true to the history and people of this iconic neighborhood, which is the basis for our modern spin on ROMEO AND JULIET.

Our twist on this saga ventures a guess as to why the families of these two tragic teens hated each other so much in the first place. To tell that back-story, we divided the book into two distinct eras, switching back-and-forth between present day and a time frame that begins in the summer of 1933 and ends just as World War II is drawing to a close.

We researched the Chicago World’s Fair of 1933, which is where a pivotal event in our book takes place. Historical accounts, including a scintillating burlesque dancer named Sally Rand, of this epic extravaganza inspired our novel. Reading about the World’s Fair did much to spark our imagination and helped transport us, mentally, to the era we were writing about.

Trying to wrap our heads around Taylor Street proved a bit trickier. This neighborhood represents not just a place, but also a spirit and a way of life. Much of Little Italy was built over in the latter half of the 20th century, and though a few blocks still remain, it took a bit more digging to really gain an understanding of what life on Taylor Street would have been like prior to World War II. We happened upon a book by Kathy Catrambone and Ellen Shubart that was chock full of photos and personal anecdotes from the neighborhood dating back to the thirties and forties. A documentary called “And They Came To Chicago: The Italian American Legacy” also helped paint a portrait for us about life for Italian immigrants in the area. Two resources we weren’t short on were Chicago-based acquaintances, and friends of Italian heritage. It was great to pick the brains of people far more familiar with these topics than we are--including our Chicago-born editor, Jacquelyn Mitchard, who was more than happy to weigh in with her own Taylor Street memories.

Historical novels don’t merely require accuracy with regard to events, places and people. They also require language and dialogue that jibe with the time period. Just as there can be no anachronisms in terms of objects and technology that hadn’t been invented yet, you also have to be sure every word you use belonged to the vernacular of the time your story takes place. The word “teenager,” for example, wasn’t generally used until the 1950s. Frequent online etymology checks were part of our writing process, and we also did a lot of research into the slang that would have been popular in the thirties and forties.

In addition to imagining the origin of the Montague/Capulet feud, ANYONE BUT YOU also recounts the history of pizza in America. We like to think our “research” extends to lots of late night takeout from our favorite neighborhood pizza joints, but in that case, we’ll admit that we still have plenty more “research” we’d like to do on that front!

Whether you’re a history buff or simply an incurable romantic, we hope readers will have as much fun reading our novel as we did writing it!